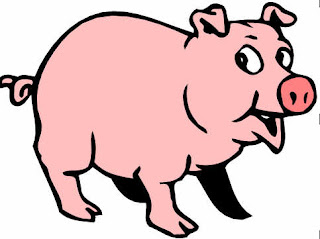 The E-Z Choice Meat guy was making his rounds here the other day. Those of you that don’t know about this, its basically a guy that sells boxes of meat out of his truck. It’s pretty pricey…about $300 per box. Not something most people I know would just buy at the spur of the moment, but SOMEONE must buy it, as he comes around pretty regularly.

So I scream and run downstairs, because I HATE telling people NO and having them try to push me. I make poor D tend to the meat guy.

J comes down stairs a few minutes later, just rolling. I guess the conversation went something like this:

”How about some chicken?”

”Nope, have some chickens out in the back yard.”

”What about some seafood? Don’t see any PIGS in the backyard..” (Ok-what the heck?? We didn’t get it either and I am REALLY hoping he was just being sarcastic and not really that stupid…)

“Nope, don’t need any seafood either. Not interested. Thanks anyway.”

”OK, well, have fun shopping at the grocery store!”

So, while I probably wouldn’t have ever bought meat from a hick looking guy with no teeth driving a pickup truck, now I KNOW we won’t be.

And while I am on the subject, what is the deal with these door to door people and being rude. When I say NO or sorry, I am busy, please just say thanks anyway and walk back down the driveway. I must be on the list, because it seems as though anyone who has anything to sell or a religion to push, they come see me.

A daycare mom and I hid from my weekly Jehovah witnesses yesterday. We sat with the door locked and hid like they were monsters in a horror movie. Later we realized she had left her car in the driveway…running. How’s that for obvious! HAHA

HAHAHA!! Is that Jehovah woman still stalking you?? You should ask her to speak to her supervisor!! You could also just snap her picture the next time she knocks on your door and let her know that if any kids or items turn up missing from your place, she will be the first suspect. Hope she will enjoy her picture on the news!!

They finally gave up on saving my soul........I got into a debate with them about death and beyond. They got rather rude when I said I did not agree with thier version but it was thier right to feel that way and it was my right to feel the way I do. BTW..they look for US flags flying in your yard as they do not agree with honoring the flag.....I guess we are supposed to have God on the flagpole!!
Ahh well..to each their own!!

I'm so glad to know that I'm not the only one who hides from people at the door! The bathroom is my friend when someone is at the door! And I think the meat guy is CREEPY!