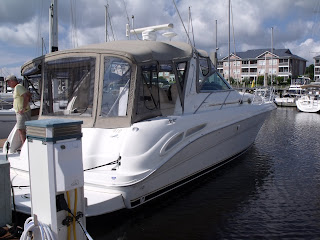 Tuesday morning we got up and headed to a marina for a boat ride.  The boat belonged to F's mama and her her husband.  I had been worried about this ride since I get sick on even the merry go round at the state fair, but had convinced myself that this would be different.  It wasn't.

We pulled into the Myrtle Beach Yacht Club and found the boat.  The marina was awesome and looked like something we see in the movies....fancy boats all lined up, and shrimp boats heading out to sea.  I started feeling a headache before we had even left the marina, but didn't start feeling sick sick until we were out in the ocean.


The boys had a ball the first half of the trip.  They were each given the opportunity to be CAPT of the ship and got a quick lesson on how to drive. (drive? Is that the correct term for steering a boat? Hmm..)

I had quietly began to turn many, many, many, shades of green, had regretted what I had eaten for breakfast, and mapped out the closest windows to me and how I was gracefully going to manage to barf out these window while looking cute at the same time. 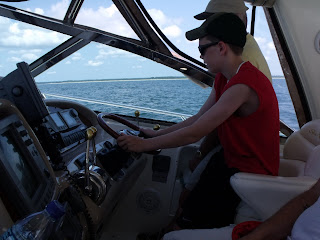 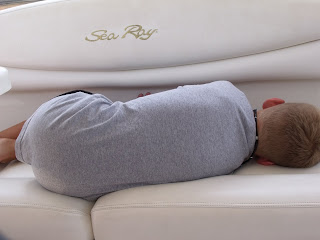 J all of a sudden started turning green around the gills so they graciously brought out the Dramamine, so we popped a couple of those.  I just tried to keep my eye on the coastline because they told me that would help.  It didn't.  It wasn't long before T suddenly looked green and became very whiny so I knew it had hit him too.  That's when it was decided these wimpy Kansas people had had enough and the boat was turned around and we headed back.

T ended up falling asleep, I never did barf, but was miserable, J felt normal after his meds, and D never got bothered by anything.

Lessons learned:  Boats are beautiful. I love them.  But only for 5 mins at a time.  Draminaine also knocks you out for several hours after it kicks in. 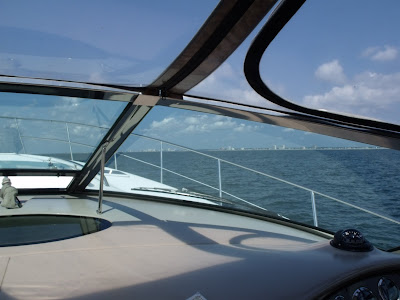 All seasickness aside, we were blessed and very thankful that Kathy and David went out of their way to take us out.  It is a gorgeous boat and it's amazing to see the coastline from out in the water.

Sorry you and the boys felt so miserable. Hopefully seeing the scenery made it worth it. :)