Our weekend included...
LAUNDRY
We are at that time of our where scenes like THIS 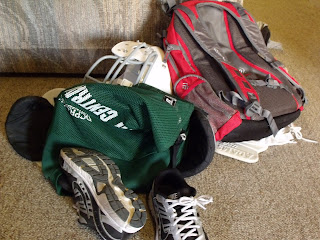 are pretty normal around the house come Thursday nights. And I try to pick all that up, run for the laundry room and dump it in the washer before the smell makes me sick. I can't believe I gave birth to these 2 stinky creatures. 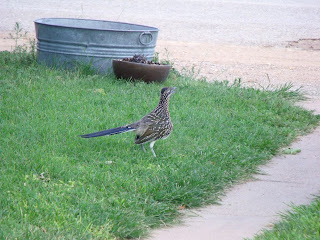 We did a bit of bird watching. This lady (guy?) has made appearances all summer long. I read that Road Runners eat snakes. She can stay as long as she likes. That fact almost smooths over the murder of a Monarch I watched her commit earlier this week. Eek. 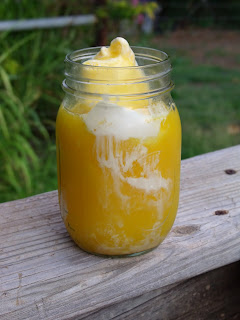 We tried out some new recipes. This one is a Dreamsicle drink I recently ran across. Jacob LOVES Dreamsicle ice cream, so I thought he would enjoy it. It's just orange juice with scoops of ice cream tossed in..or as Tristen said "a root beer float with orange juice."  Anyway, it was pretty tasty!! 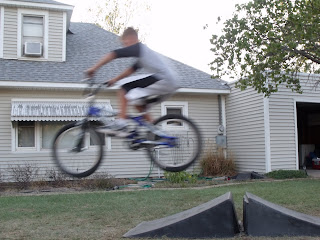 The boys ramped their bikes. Our neighbors have ramps setup their yard, and the neighborhood has turned into a bit of a bicycle gang. They ride for HOURS and I'd really like to know just how many miles they are putting it. 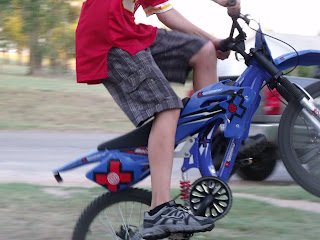 Bikes have been a hot topic around here most the summer. They have acquired lots of  bikes and parts, have repaired a lot of them or used parts from here and there to make whole bikes.
I complain about the bike graveyard that has taken over our side yard, but I guess I shouldn't complain.  There are many worse things they could be doing than riding and working on bikes. 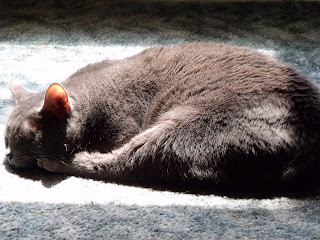 Some of us found the BEST sunbeams and laid around and snoozed. ..Perhaps for most of the day.  This is the closest Paris has been to sunlight in 9 years. The outdoors is a dirty and disgusting place, where the feet of the queen must not touch. 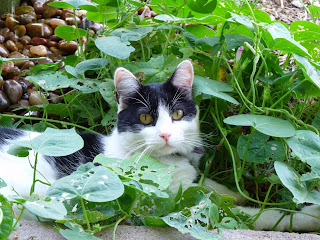 But this one says, HEY! You don't know what your MISSING!! If you hide in the Morning Glories, you can POUNCE on the first unsuspecting bare feet that walk by!

Hope you have a great week!!

First of all, thank you all for your kind words in my previous post. Dad is home and doing well at the moment!  =)

We have been blessed with some lower temperatures the past 2 weeks or so, and it's been such a relief. I'm seeing a lot of improvement on my plants. However, it spiked back up again today. I will be sad when this "green season" is over, because it IS my favorite, but am ready to welcome fall. This summer has just been too hard. On plants. On humans. On animals. 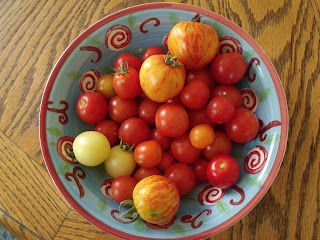 Our "real" tomatoes are just now starting to take off, but we have been enjoying lots of cherry tomatoes. See those cool striped ones? They are called Red Lightening.Technically, they are suppose to be normal size tomatoes, but just haven't been able to get any size on them.  And see the ones that look green? They are actually fully ripe.  They are Italian Ice tomatoes. We are really enjoying them, and it's been a lot of fun growing some different varieties. 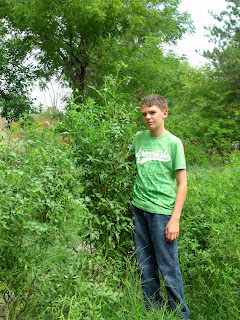 Now our tomato plants may not be producing a lot of fruit in the heat, but they have been growing! Check THIS out!! 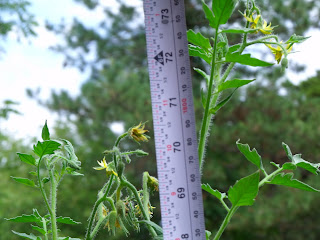 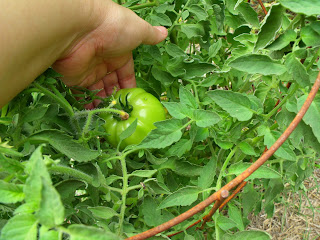 All the plants have suddenly decided it's time to make some mators! YEA! 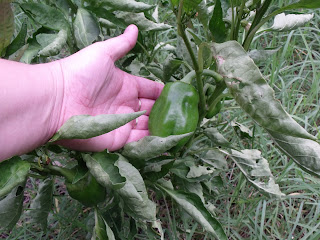 And I am VERY excited about the green peppers! This is the first time I've grown these, and they've pretty much just sat all summer. The temps lowers and suddenly they went to town! I've also got a bunch of itty bitty jalapenos coming along too. FINALLY!!! I just might get to make salsa after all! 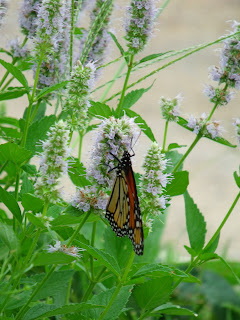 And ok-ok this isn't from my garden, but I was really happy to see this cutie hanging around the front yard!!

Lots going on next month. September will show us back on the bunny show circuit after what feels like YEARS. We haven't shown since June. Well, we took bunnies to our county fair, but that doesn't really count. ;)  Everyone is anxious to get back to it. The bunnies...well, the bunnies said they don't care what we do with them or where we take them, as long as the temperature stays around 80.  Anything over that, they say, is for the chickens.

..is just before the dawn.

I tend to be a private person about some things. I have a few friends I'll spill all too, but certain subjects I prefer to skip right on over. This one is one of them, and I'm sure you've gathered it from my blog already but:

My dad is dying.

And the past 24 hours have been a whirlwind of emotions. And blessings.

My family took him up the the Hospice House yesterday evening and were not real sure he was going to come back home.  I watched him slip in and out of hallucinations, with fear building up in me that we were about to lose him, and at the same time, fear that this would NEVER stop. It's this jumbled mix of erratic thoughts and emotions when your watching someone you love lose a battle.

Not long after we had been there, the Chaplin came in to see him. He's known Dad for the 2 years he's been on the Hospice program and I was shocked at how much he had really talked and listened to him. I mean he LISTENED. He knew it all. He sat with us, talking to Dad while holding his hand the entire time.

During this time, I suddenly had this overwhelming feeling of  peace and warmth come over me. The panic disappeared. I felt calm. I NEVER feel calm.  And I knew that even if something happened, everything would be ok. I couldn't explain it. I just knew it. I remember the Chaplin turning to me and just smiling, almost like he had felt it too.
"Maybe someone is praying for me."  "Maybe it's just the peace of this place."  "Perhaps I really AM losing my mind."  Whatever it was, it was much welcomed and I KNEW it was SOMETHING. SOMETHING was with us. SOMETHING was trying to tell me that it would all be OK.


Saturday Dad was doing much much better, and heading back to normal. I had  asked him what he remembered.
"Almost all of it," he said. During this conversation, he kept turning around, and then laughed and said "I keep thinking there is someone back there."
"Maybe there is,"  I said, laughing with him.
He turned and looked me, with his beautiful sky blue eyes, and said, "There has been. My dad was here last night."


And I smiled and  nodded my head. 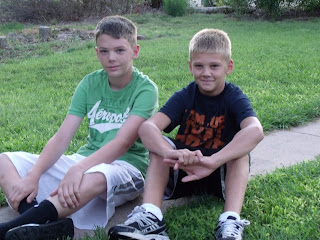 Routine and hectic schedules entered our life again today. I think we are ready though. Jacob's headed in this morning as an 8th grader, Tristen as a very nervous 6 grader. But he admits it IS nice having a bigger brother to help you out with questions.

Jacob is officially as tall as me.  At a recent Dr's appointment he was 5'6. I'm 5'4 1/2. (That 1/2 is really important to me!) BUT--he had shoes on, so I'm still saying he's "as tall" as me. He's also wearing the same size shoe that his FATHER wears. EEK  Even though I've had 13 years to get used to it, growth and development of my kids still amazes me even to this day!

Tristen has had a lot of anxiety about starting middle school, but thinks he will like it. The highlights are getting to take snacks for in between classes, (Food is a big deal to that boy right now!)  and not having the same BORING teacher all day.

I'm hoping the rest of the year will go as smooth as it did this morning, but I'm not holding my breath. The excitment seems to wear off mid-way through the first week here at our house! =)

How can something so teeny... 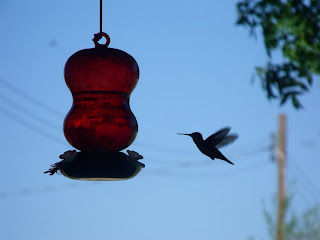 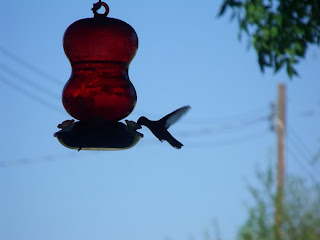 . ...make you hold your breath and squeal with delight... 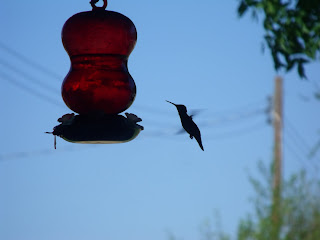 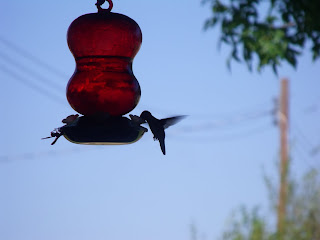 ..and thank God over and over for the amazing world we live in!
Take a moment to enjoy the "teeny" things around you! They are pretty amazing! My sister's BEDROOM! =)
To make a long story short, her bedroom is right by the bathroom, where a few years ago was a leak under the house. The moisture from that leak caused damage to Michelle's floor. A couple of weeks ago, while moving a chair for her, Danny and my brother realized just how bad it had gotten and decided it was time to replace the floor. The ENTIRE FLOOR.
Anyway, while they had the sub floor down they mentioned it would be the perfect time to paint, so that's just what we did.
I took BEFORE pics, and then couldn't find them ANYWHERE. Later, Jacob got up enough nerve to tell me he thinks they were one his SD card he uses for his trail camera and he deleted them. Oh well.
The walls have had the same wallpaper the entire time I was growing up in that house, and I'm pretty sure it's been there at least since the 60's or 70's. So it had seen better days.  But the wallpaper was still in good shape, just kinda worn and dirty, so we just sealed it all in with a oil based primer, and then we were able to paint over the primer with regular water based paint--DANDELION YELLOW-- with no worries about it causing the wall paper to lift.
The ceiling, trim, and doors are all painted in an oil based black primer. And let me tell you, that stuff is SLICK looking. It's MESSY, but VERY glossy!
To finish it off, a zebra print border...err....zebra print GRAY TAPE was added for a border. Who knew they made such thing!! 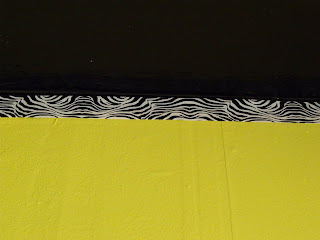 I was a bit taken back by her color choices, but just walking in there makes me smile now. Because it IS very cool, and looks JUST like someplace my sister belongs.

The Year That Wasn't

This was the year that my flower beds would finally look like they do in my head when I picture them. You know. Perfectly "groomed", not overtaken by weeds. 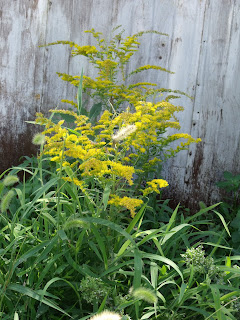 Obviously I was wrong and this was NOT the year.  As of right now, the weeds have taken over everything because I'm a baby and refuse to weed when it's 108 outside. As of right now I've lost both Shasta Daisy's and 2 Gaillardia plants. Two others are just barely hanging on. I keep hoping that maybe they are not dead, just dormant, going to the happy place plants go to during the winter, but just heading there earlier this year to escape the scorching heat. 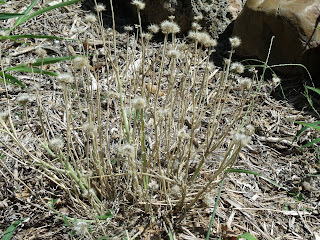 Or perhaps I am in denial and they are dead. Could be.  I am so incredibly frustrated this year and at this moment have been daydreaming about pulling everything up and laying a bunch of decorative rock in it's place.
Who needs green anyway?