I don't post a lot about personal things. Sometimes, though, you just get that nudge to write about something. This one is hard for me to talk about, much less put out there for the entire world to see. But here goes.

I am sick and tired of struggling with my weight.

Is this post going to change anything? No. But I'm acknowledging my problem and maybe with the feeling of admittance, I will feel more comfortable posting about it and my journey.

Everyone fights some sort of fight. This is mine.

Whew..ever need a weekend away from your weekend?? That's how ours has been.

Yesterday afternoon we were talking about how we needed to go camping, which turned into a discussion about setting up the tent in the yard for the guys to sleep in, which turned into  "how much fun" it would be to camp in the tree row at the farm. So that's what we did.

I, for one think its a lot more fun to camp when there's a lake to fish near by. And a toilet. And AC. And running water. No, I am not what you call a camper.

I didn't even grab extra clothes. Just my camera, my cell phone, and my bird book.

It wasn't what I would call a grand time, but it was nice.  Dan set up our tent so it faced the wheat field. Jacob and I took some nice pictures, just as the light was juuuust right as the sun was setting.

They shot a few cans off fence posts, I bird watched a little, sat around and enjoyed the sound of the wheat waving,and that's about all we did.  None of us slept great. I was uncomfortable, and then couldn't sleep--I  kept thinking about how creepy the tree row is in the daytime, and here we were camping in it at night. And the guys couldn't sleep because apparently the new brand of nose strips I got for my snoring, don't work. HAHA Dan told me we were all perfectly safe as I had scared away any wildlife in the area. ;) 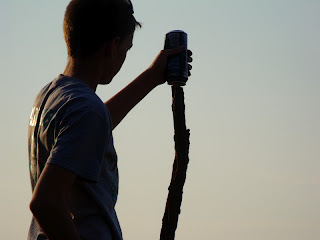 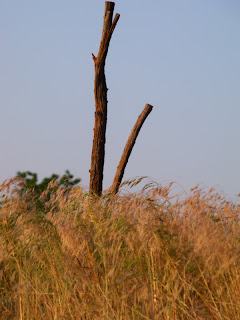 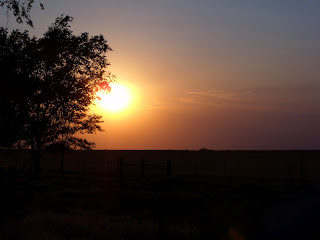 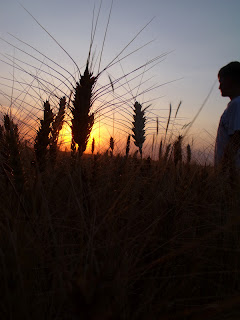 After a restless night, we packed up, and headed to town. I headed to eat lunch with some of my classmates, who were in town to celebrate our 15 year reunion. Not many were able to make it, but we still had a great time seeing each other. 2 of these guys I had not seen since we left the school on graduation day. 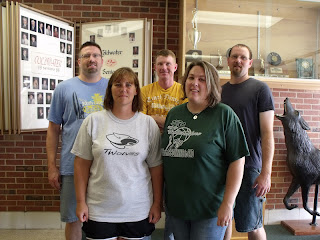 After lunch we toured our high school. Lots have changed there, but my friend Amy and I discovered the girls locker room smelled EXACTLY the same, and were transformed suddenly to 7th grade.  Hopefully we can get more to come to our 20th.  It was a lot of fun to be with the people who went through the most awkward time of your life with you, and meeting their wives and kiddos!

I'm off for a nap!! Have a great Memorial Day!!

We have a kid in high school. *gulp* How did this happen?? Wasn't it last week I was getting up in the middle of the night with a newborn, fully convinced I would never sleep again??  Amazing.

Before I post about his graduation, there is a song that was shared with me last week. It makes me cry, and it beautifully expresses my feelings I've had over the past week. Listen to it!!


Monday evening was the big night! Well, for us, anyway.  In typical man behavior, Jacob thought 8th grade graduation was just about the stupidest ritual ever. He seemed to have a lot of fun though, and was very happy to get out of school a few days before his brother did. He stayed at his buddies house the night before graduation,  checked out at school, graduated, went the the dance, and then a couple of his friends stayed here, in the tent, until it started raining at 4am, and they invaded the house.   He opened up his first checking account with his cash gifts he received, and has discovered thank you cards..well, they are not really so much fun, especially when you write like a doctor. 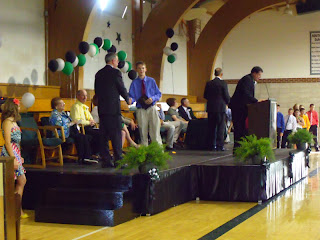 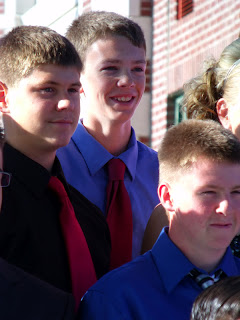 The 8th graders made an identity book, where they wrote about themselves. My Family, Me Back When, and The Feeling Me, are just a couple of the categories  I love this book, and will be keeping it FOREVER.  I saw the Jacob I know, but I also learned a lot about him through his writing.

I learned he loves his family, that he thinks we are normal, and that he hates conflict within his family unit.  He loves his friends and relies on them, and probably will be sporting a police uniform someday.

There was one part that made me cry, under "People I Admire".

"The first person I admire is my grandpa Mike. I admire him because my grandpa is very strong. A normal person probably wouldn't have lived through the things he had been through." 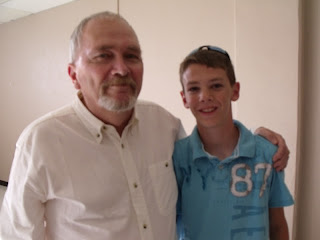 Here's a short and sweet version of the weekend.
Michelle graduated. Yes, diploma was signed. I cried. Took lots of pictures. Family came. They ate. We hugged. They left. Cleaned up.
Yep..that's basically how it was. 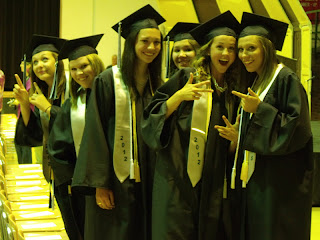 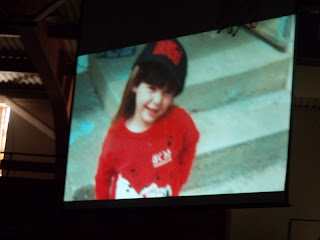 My first born, my bald headed baby boy, who grew up in a blink, will graduate from the 8th grade tonight.. Stayed turned for that post..I'm pretty sure there will be pictures!!

My husband of almost 15 years bought be something wonderful and beautiful yesterday.  No, not flowers or candy.

He sat at an auction for HOURS yesterday.  And bought me 2 church pews from the church my family  attended for 6 generations.

He didn't understand WHY I NEEDED one. He just knew I had said I wanted one really bad.

My great-great grandfather helped build that church. It's where I was baptized and attended Sunday school. Where I watched my dad become a elder, and  remember beautiful Christmas trees in the corner and the most amazing candlelight services, with candlelight reflecting off the stain glass windows.

The congregation slowly dwindled down, the old timers passed away, and the church had to close. The last time we attended service there, there had been 3 other people there. 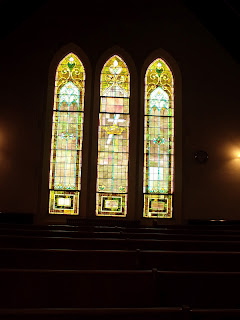 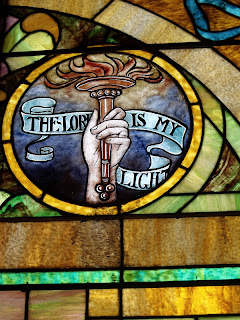 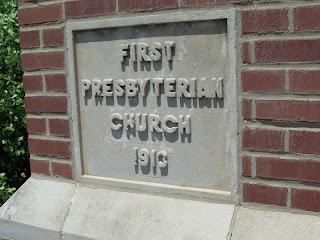 
I see some changes in both of them! =)
But I'm pretty sure Black Out has him beat in weight gain!

Oh Mylanta. Is it summertime yet???  I seem to have so much to write about, but its random stuff, so I thought I'd just add pictures with little tid-bits of our happenings. 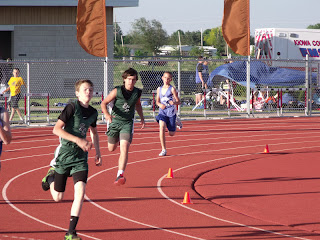 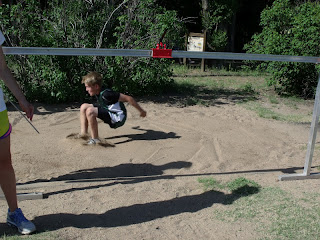 Tristen is officially done with his track season and Jacob will be after Thursday. Jacob seems a bit sad its almost over. He really has enjoyed his season and his coaches.   I, however, won't miss packing lunches. After a couple of weeks you just seem to run out of lunch box creativity. 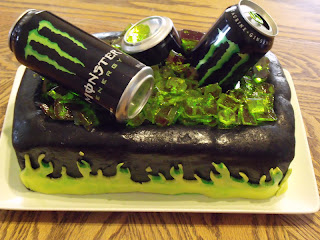 We officially have survived another April of birthdays!! This above was Tristen's cake. Didn't our cute little cake maker do a fantastic job??? I told her that he was 12 and loved Monster Energy, and this was the result. She even made the frosting Monster flavored. It was a huge hit!! 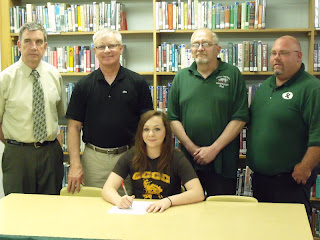 And THIS girl is officially ready for college. And she will be playing basketball.  The very handsome guy behind her is my dad. ;)  I am so very proud of her and will be needing some new team t-shirts and probably new tires of my car, so I can go cheer her on. 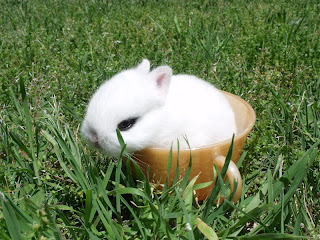 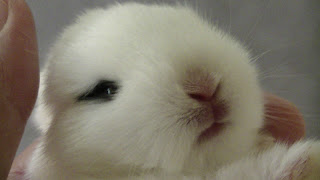 My dwarf Hotot doe had a cute little singleton.  And I do mean CA-UTE!! He's spoiled rotten, and the bigger he got, the more excited  I got about showing him..until one day I noticed a spot behind one of his ears..a DQ. =( And it IS a little buck, which I don't need. So my heart is a little torn.  If he turns out to be nicer than his dad, I might keep him. I just don't know. Or I may just keep him anyway.  I DO know, that I am really enjoying him and this is the sweetest bunny we have ever had. Jacob has named him Buster. At any given time any one of us will be out in the barn snuggling with him. He's 2 weeks old and weighs a whopping 3oz. Aren't those little ears the cutest thing you've ever seen?? 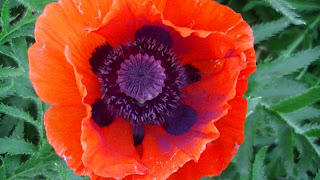 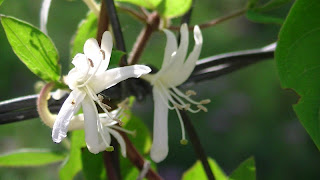 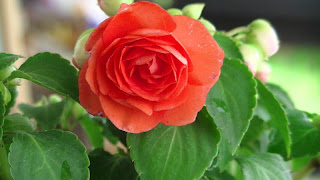 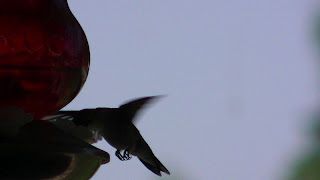 And we've really been enjoying the blooms in our yard the past few weeks. My friend Melanie told me she'd had a hummingbird at her house, so I put my feeder out a few days later. Was a good thing, because I had one the next day! =D AND..my Honeysuckle bush I planted year before last FINALLY bloomed. We had one if our yard when I was growing up, and I remember sleeping with the windows open and the smell blowing in. Delicious!!

We've gotten our garden MOSTLY planted. Still needing to get the Okra planted. I planted beets a few weeks ago and they either never..NONE OF THEM..came up, were washed away with the rain, or some animal REALLY loves young beets. They are ALL gone.  Good thing I didn't plant all seeds. I'll have to try again!

And I'll spare you the picture of this one. Tristen is really bummed-- his heifer, Black Out, has developed several patches of Ring Worm.  She looks pretty rough, and resembles something that came out of the ghetto.  We've been treating her like crazy, but it really stinks it had to pop up now, just in time for our county spring show.  *itch itch itch*  These things never happen it seems in the dead of winter when nothing is going on!  So he won't be participating at the show, but he sure wants to be there to watch it! =)

Hope everyone has a fantastic week!!!