Sunday, she played her favorite game one last time...chase the water hose...and today..she left to go find my Dad.

Anyone who says an animal is JUST an animal...never met my Dad's dogs.

Taffy's entire life was devoted to him. She followed him from room to room. She kept him company when he became home bound.  When he wasn't feeling good, she didn't leave his side. She ADORED him. ADORED.  She spent every moment of her life, if he was home, with him. She even rode to town with him in the patrol car to get the mail before he had to give that up. She loved nothing more than a good car ride. And a good game of roll the hedge apple down the driveway.
She loved water. Ever see a cat chasing a laser pointer or a piece of yarn? That's what she would do when you tried to water the flowers. Her ears would perk up, her tail would start wagging, and it would be on. In the twitch of  the water hose, she'd turn into a pup again. 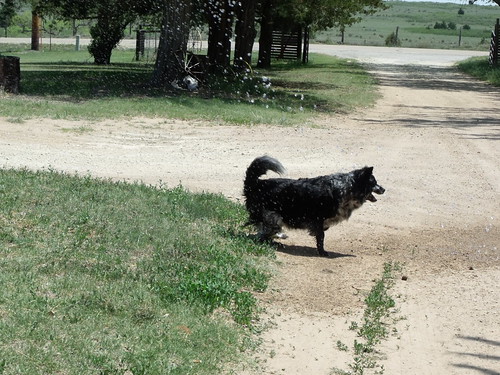 Taffy had coat of long beautiful shiny black hair. She was some sort of border collie mix.   She had expressive brown eyes, that oozed love. She used to lay her head on my Dads lap when he was sitting in his wheelchair and just look at him. "What? What, Taff??, he'd whisper to her. Thump-thump-thump would go her tail, but she would never break eye contact with him.

One day, right after my dad died, Danny and I, and my brother and sister were at the farm. We were looking for pictures to take to the funeral home. Hospice had just come and taken all the medical equipment, and the house felt cold and sad.   Taffy came out of her hiding spot, and cowered her way over to me. I sat down, and realized every feeling that *I* was feeling...was mirrored in her eyes. She was lost. And scared. Didn't know her place or what she was suppose to be doing anymore. Confused, and so tired.  I remember I just laid my head down on her head, and just cried. She just sat there, and didn't move, and let me cry.

She never was the same after Dad died.

And Sunday..we removed my Dad's bed. It was like she couldn't stand it anymore. And she turned her light off.

Dad had another dog named Tuffy. She died of cancer a few years ago at the ripe old age of 16.  As she was taking her last breaths, my Dad bent down and whispered to her. "Go find a good tree, lie down, and wait. I'll be there soon."   And I know she did. I've thought a lot about that since losing my Dad, and what a reunion that had to have been.

And I know they were right there waiting on Taffy. Oh, how I bet that tail was a thumping when she saw them again.

Run and play hard, sister! Thank you for loving Dad, and keeping him company all those years. Make him go find you a water hose.

And tell him how much we miss him.

Is it SUMMER yet?

I promise I haven't forgotten about my blog. I'm trying to survive to end of the school year. When the insane schedules will stop. And I can stop handing over lunches and money. And keep track of where my children are at.  For real--my kid went to an FFA contest a couple of weeks ago. I thought he had gone music contest in Pratt. Danny said nope, he's at FFA in Scott City. Turns out, we were both wrong and he was at Liberal. Comical, yes. But not a very good feeling when you can't even keep track of where your kids are at.

We are gearing up for Tristen's 8th grade graduation.  We have a heck of a party planned.  I don't do big elaborate birthday parties, so this has been a change and a lot of fun for me. I can't believe he's going to be heading to high school. I AM THRILLED both of my kids will be back in the same school, and in the same town we live in, for the first time!
Tristen recently attended his first Dutch Nationals. It was held in Hutchinson. None of his rabbits placed, but he wasn't surprised. He hadn't been very excited about what he was taking.  Usually you breed specifically for a big show like this, but he couldn't get any of his to breed or take.
He's currently busy with track, and has been enjoying long jump. He's also running the 2 mile this year. HATED it in the beginning, but it grew on him enough to stay in the event. He stays pretty consistent speed wise. 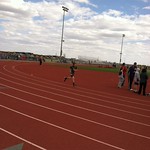 He also had a recital for The Studio he takes classes with every Friday. He never really talked much about it, but seemed to really enjoy it. So we were a little shocked to see him master THIS:


He had told me that he had done this in class, but was so flippant about it. He also managed to flip and land on his feet every time he hit springboard. I've decided this HAS to be some sort of "Bruckner" trait, as it most CERTAINLY is NOT anything he got from MY side. =P

As I type this, Jacob is in Manhattan. He got to go there for livestock judging for state FFA contests. He's also now licensed in the state as a nuisance wildlife controller...which means he can trap nuisance animals out of season. He has to be the youngest in the state. You have to 16 to test, and he tested a week after his birthday. Hes been keeping really busy, and has caught several beavers. 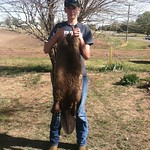 His mother, however, can't seem to get him to snag the MOLES that are DESTROYING her new rosebushes. ;) He stays busy with work, feeding his 4-H steers and bucket calf every morning before school, golf, and always seems to be running around on a mission on some sort.  He recently made the decision to be baptized.  (We all had heavy hearts that evening, sitting in those church pews, missing my dad. We decided....that he WAS there... and surely had the very best seat in the house!)  It was one of those moments in your child's life, that you want to remember forever. Every single detail. 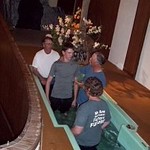 Tristen and I have our "garden" all planted. We are doing all containers again this year, but have quadrupled what we did last year.  This year we are trying a variety of corn made for containers, watermelon, cucumbers and spaghetti squash, all in containers. The research I've done says that yes, all of these can be grown successfully in containers, so we are experimenting!!!  Tristen is growing his own stuff separate for his 4-H horticulture project, and has even harvested his own broccoli! For the first time ever, we planted cabbage, broccoli and peas early enough they all really thrived.  We also more than doubled our Okra, and added a few herbs. Someday I'd like to have a full sized in the dirt garden again. But until our lives settle down just a little bit..this way of gardening is WONDERFUL and PERFECT!!! 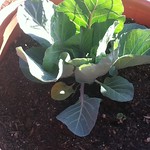 To all your tired and weary mommas....hang on! Summer is coming!
=)