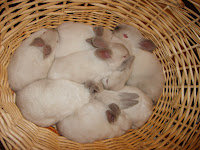 I haven’t blogged for a little while, and I have heard about it from my mom several times, so I thought I would sit down and write for a bit.
Honestly, I just haven’t felt like sitting down and blogging something happy or funny. Things have been kind of rough over the past couple of weeks. However, I really enjoy writing and reflecting, so I think this is exactly what I need to do!

So, anyway, it seems my household is following Murphy’s Law:
"If something can go wrong it will.” Friday was the very worse. 2 of our neighbors dogs got in and killed 6 of our 8 chickens. Keep in mind that these were mostly T’s chickens, and Friday was T’s birthday. The man the dogs belonged to was super nice about the entire thing, and paid for everything to be replaced and treated-- we had to take Dan’s white giant bun over to the vet. The dog got under her cage and pulled her toe mostly off and I had to run her over to the vet so that they could clean it out, finish removing the toe, and then stitch it all back up. She’s been nicknames “Nubs” as she looks like she’s permanently doing that little “rock on” hand sign you see everyone doing. It was all a very sad and horrible experience for everyone. But—we did get the chickens replaced, and Eric and Kim bought the boys each a new chicken too, so we have more now than we started with. It seems so stupid to me that I cried my heart out over chickens of all things, but I sure did.

As I mentioned, T’s 9th birthday was Friday. He got a rock tumbler from us. He is geeky about rocks, so this was a hit and we already have a load of rocks going in the laundry room. Man, those things are noisy! It also came with some key chains, and stuff he can make when he gets his rocks done. He also got a quite a bit of cash, and took some of it and bought his very first BB gun with a scope, so he thinks he’s the bomb. We went to the school carnival on Saturday, and T walked out of there with 54 cans of pop!! Soda is not something that is bought for my kids a lot, so this was a super big deal to him!

J’s doing good. His baby buns are almost 4 weeks old, and we will be weaning them next week. We did have to put one down today. There was a baby who stopped growing about a week ago, and suddenly started having problems, so I don’t know if mom stepped on his head or if he just had something wrong with him, but he really seemed to be hurting and was so weak. His little runt boy we didn’t think would make it has almost caught up with his siblings. They are super cute right now—little white poof balls that make me laugh. I could sit out there for hours just watching them run around.
Anyway, back to J, he’s got a really bad head cold right now and had been feeling pretty nasty, but think he’s finally feeling better.

D got the grass planted several weeks ago and by golly, there is baby grass growing out there!! =-) We were hoping to get the garden planted this week, but with the weather it didn’t get done. I also think he talked about tilling the spot up one more time before we plant the rest. Our potatoes are poking up though!! Hopefully this week we can get it all planted. I have 27 tomato plants needing to be in the ground! YUM! 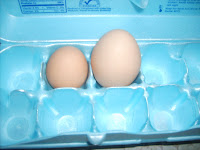 Yesterday we had a surprise out in the chicken coop. Our hen Tyson laid an ENORMOUS egg! This egg would probably been the equivalent to a human giving birth to a 15 lb baby with no drugs.
Anyway, it turns out; this is our very first double yoked egg. The internet says that these eggs are 50% bigger and wider than normal eggs and would have meant twin chicks in an egg. (They never hatch though.)
That egg is so big it doesn’t even really fit into the egg carton. The egg we used to compare it to is just a tad smaller than the large eggs I buy at the store.
Holy Moly.

So, I have now blogged about rabbits, chickens, and now eggs. It’s safe to say it doesn’t take much in this world to amuse me! 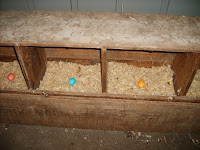 So, since March, when we got our chickens, I have been scheming up the best prank ever to play on my boys. D and I were going to dye some special Easter eggs, sneak them out to the chicken coop, and when the boys went to go get eggs on Easter: SURPRISE!!! hehe I was pretty sure that J would know it was us, but thought we could at least convince T that the chickens laid colored eggs just for Easter.
So, everything was going great. D snuck out, hit them in the coop.
We were just ready to head up to bed when I noticed that T had stuck a note to the Easter Bunny in his basket.
Dear Easter Bunny, Would you please leave some colored chickens eggs in the chicken coop. Please Please Please Please?? That would be such a good surprise. Have a Happy Easter. Love, T
Oh great. So, I don't get credit for the most amazing joke I have ever come up with...the Easter Bunny gets to take it all. (I'm still not sure if he just wanted eggs HIDDEN in there, or REAL colored eggs that the chickens had laid.)
But it was still funny. D heard T scream clear inside the house, and I am pretty sure our chickens won't be laying ANY eggs, colored OR not, for a LONG time. T's screams of joy probably scared them into egg hibernation.
I guess he won't be believing in the Easter Bunny forever so I should enjoy this fun while it lasts.

For the record, I am SO SICK of cold weather, snow, and hurricane force wind I could just SCREAM!!
So anyway...
..it’s not even 7 pm and I am sitting here in my pj’s, enjoying a glass of wine. A REALLY big glass. I hope no one comes over unexpectedly!

We had a great weekend. J’s birthday was on Saturday and we had some of the family over for a small BBQ. J wanted Guitar Hero so that’s what he got from us. He made off with a pretty good wad of cash, as well as some ankle weights he’s been wanting, and some other stuff, I just can’t remember. (Must be the wine!) I think his favorite part was though was sitting and listening to my dad. He was in a story telling mood, and some of these stories he had never heard before. He couldn’t believe his grandfather was so crazy and silly back in the day. Dad got worn out and didn’t stay for very long, but was nice to have him over for a bit. He doesn’t leave his house much these days.

D got the grass planted so I’m crossing my fingers grass grows soon. Since he’s tilled it up I’ve had to dust twice as often!! UGH!!

T has decided he wants to go out for baseball this season. You have no idea how excited I was. He has made so much progress this year. This is the very first time he’s wanted to play baseball. He played football, but I think he feels “safe” with playing football because he’s hidden inside his helmet and pads.

J’s bunnies are doing super. We are still bringing them in at night and taking them out to mom in the morning. They finally have fur, and are almost ready to start opening their eyes. He does have one in the litter that seems to be the runt. He is half the size as his brothers and sisters, and never seems to have a really full tummy, no matter how much we step in and give him extra feedings with his mom. I’m not sure what will happen to that little guy, but J’s trying everything he can. He’s 11, with his very first litter of buns, so the whole “sometimes that just happens” spill really seems cruel to him.

I am so ready for spring. REAL spring. Spring with no snow or cold wind. I got our seeds for our garden a couple of weeks ago, as well as a dormant Bleeding Heart plant. I love those things!! I had one for many years, and when D chopped down a tree in the front yard, he killed it off and it never came back. So, I have my new one planted and started inside, waiting for the weather to warm up. It’s already got some nice shoots coming up. I also started some Sweet Peas. I’ve never grown them before, but fondly remember my grandmother having them. She planted hers so that they would grow up her clothes line poles at the end and I always remember smelling them. Not sure where I am going to put them, but I'm excited to smell them and pretend I am 5 years old again..even if just for a few seconds!
Hope everyone has a great week!!