Livestock is my boys' very favorite thing in 4-H, and this was the first year Jacob showed cattle. Last year was our first year ever, and we have moments of deer in the headlight looks and were certain we should have run back to the bunny barn where we belonged. This year went so much smoother!

But FIRST, RABBITS! Jacob ended up with Grand Champion with a SR Californian, and Reserve with a Chocolate Havana.  Judging wasn't typical at all. The rabbits were having problems with the heat, the judge knew this, and hurried though, trying not to handle them much.
Jacob actually lost a JR Californian to the heat at the fairgrounds just before the judging...a first for us. =(  It was actually his showmanship bunny, so he ended up running home and grabbing a senior who hadn't been practiced with showmanship for over a year. He did well though, and cooperated for the most part for Jacob, and he was awarded a purple ribbon and duffel bag for his efforts.
Tristen had some nice Dutch entered, but they are in the weird teenage stage, and just weren't developed enough. He hopes they will be kicking behind on the show table very soon though!   There was also some nice Mini Rex as well as a Polish entered. It was nice not to be the only rabbit exhibitor,
Jacob also got a blue on his 2 dressed and frozen market rabbits he entered. He got to sell these at the auction, and I have many stories to tell about this experience. HAHA!

The rabbits went home so fast after judging I didn't even take pictures.


Tristen took Black Out to the fair under 2nd Year Bucket Calf.  I sat in the stands with my mouth hanging open and watched as my shy not-so- little boy look that judge in the eye and gave him an ear full about his plans for his heifer.  Those that know Tristen will know what a huge step this is for him. Last year, as the judge walked closer, Tristen's head got lower  and lower and he looked at his boots when he talked. =)  It didn't matter what color of ribbon that kid got, it was a victory and I was so so SO proud of him.  In the end, he walked out of the ring with a PURPLE ribbon! 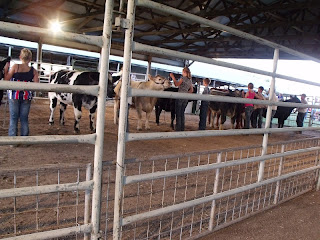 He also got a blue for Intermediate Showmanship.


Jacob took Charlie, and received many comments on her.   He participated in Intermediate Showmanship. There were so many they broke them up into 2 groups, calling 4 back from each group to compete for the purple. Jacob was one that was called back, which I also considered a victory, given it was his VERY.FIRST.TIME.EVER to do this! He ended up with a blue!!  He also made us laugh when he announced that while cattle may be more work in general,  cattle showmanship was easy, and that they should try doing RABBIT showmanship sometime, which is much much more than being asked a couple of questions. 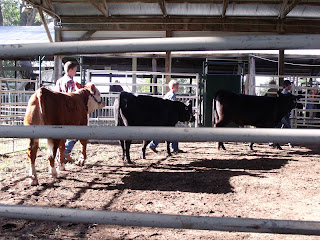 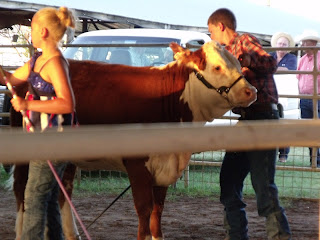 Jake was a bucket of nerves, but got over it quickly when he entered the ring. His only mishap was almost poking the judge in they eye with his show stick when the judge came to shake his hand. ;)


The auction was a big busy deal for our household this year. Tristen got to sell his Peanut Butter Cake and Black Out, and Jacob got to auction off his 2 market rabbits and Charlie. (They keep their beef projects.)


I should mention this causes me anxiety every stinking year. I'm always afraid my kid will get out there, and it will just be so quiet all you can hear is the crickets chirping.  Perhaps I have some deep dark hidden issues with being picked last for kick ball or something, but I really worry about this.

However, I shouldn't.  Because the people of our county are amazing and ALWAYS take care of these 4-Hers. But I always breath a sigh of relief after that first "yep". 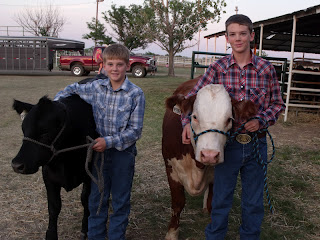 WHEW!! What a week it has been. Our family loves the fair, and showing livestock, but this year it seemed the 2 weeks leading up to it took a lot of "umph" to get things done.  The boys did well, and as of today, we have survived, with only a little quarreling and a few naps. Here are the results for the indoor exhibits.

This year for woodworking Jacob made a chest of drawers out Maple. His dresser is old and ugly, and this was something he needed.  He ended up winning grand champion with it. 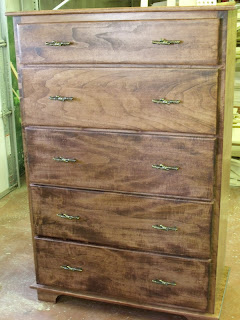 His photography project is one of his favorites. He submitted 6 pictures.

Tristen's favorite project his foods. This year he made a PB cake, Chocolate Chip Swirl cake and Caramelitas. He won reserve level II with his PB cake, and gets to make it again for the auction this evening.  His other 2 entries won a blue and a state fair blue.
A new thing he did this year was enter some Monster Energy Drink jelly. I was a bit nervous about this one, as I am a pretty new canner, and while I can can and put things away, I wasn't sure if I was really ready to teach him how to do it.   He seemed to understand and get why we did the things you have to do, and we were happy with the first batch he did. 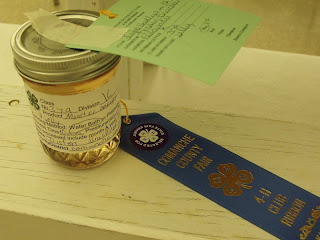 The judge liked it!  He won a state fair blue on it, and "beautiful, perfectly jelled, no bubbles, and has "pizz-zazz" " was written on his card. The jar is put away, all ready to go to the state fair in September.


For woodworking, he made a stand to put his snake tank into. He was pleased with a reserve. Slyteryn seems happy with his new view. 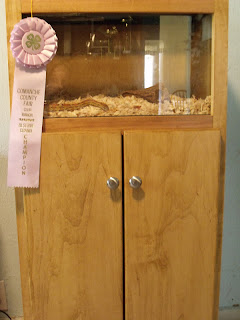 Tristen also entered Jalapenos and won a blue ribbon. He had hoped to enter a bunch of garden items, but our garden just isn't doing well this year. There is always next year.

He also entered a string art project and was awarded the grand champion for the arts and crafts division. He's planning on taking it to the state fair. 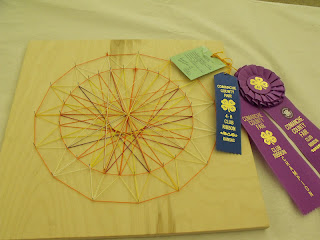 We are running on empty. Some of us more than others. 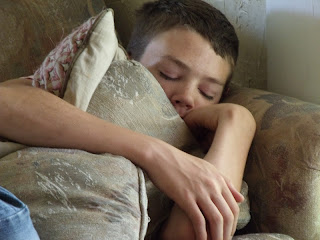 What a week its been. I lost a friend this  past weekend.  A friend who had been a major part of my life since I was 14. She was 34 years old, and had battled brain cancer.  She left behind 3 young children. 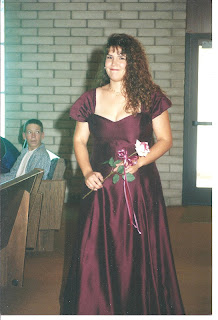 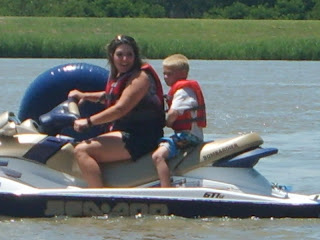 This is the hardest death I've ever dealt with. There is something about saying good bye to someone who knows all of your secrets, who you've talked on the phone for hours and hours with, who you shared pregnancy symptoms with, who loved and spoiled your children..  She had this amazing smile, and a laugh that just made YOU laugh. 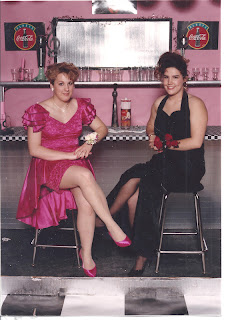 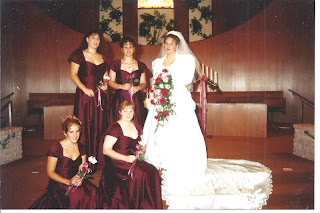 Lots of memories and thoughts have consumed me over the past few days, and I finally realized yesterday just how incredibly lucky I was to be a part of something that is so hard to say good bye to.  I  am going to miss her so very much.

Saturday, I was blessed with a brand new niece.  It was such a strange feeling to be mourning the loss of a life, while being overjoyed for a new one.   Her name is Emily, and she's got lots of dark hair, makes cute little newborn noises, and I'm pretty sure she's an angel in a diaper.  ;) 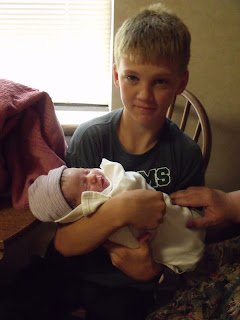 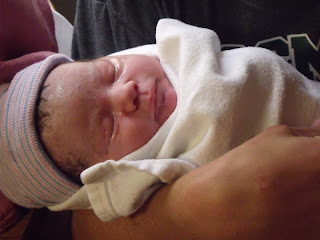 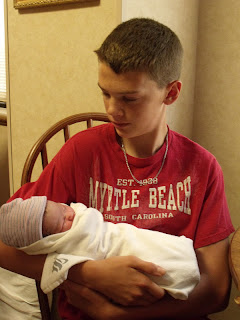 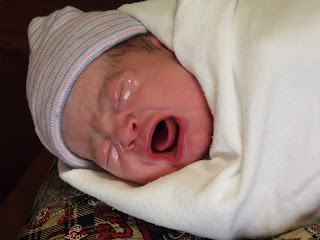 At the hospital, and on the way home, I was annoyed by a scratchy throat.   2:30 that morning I woke up covered in sweat and freezing my hind end off. I still hadn't clued in that I was sick. Just grabbed another blanket and silently cursed the kids, thinking one of the had messed with the thermostat. They hadn't.

Apparently, strep throat loves me so much, it feels the need to visit once a year. This is the 4th year in a row I've had it, and interestingly enough, it always seems to hit during this time of year.

God Bless the manufacturers of Keflex. After a very rough 2 days of body aches, high fever, and vomiting, I started feeling better. 5 days later finally feel normal again.  I've never had vomiting with Strep before. Not fun when your throat hurts and it swollen.

Saturday, Jacob scratched his eye, and part of his cornea on something that was flying around in the truck when the windows were down. 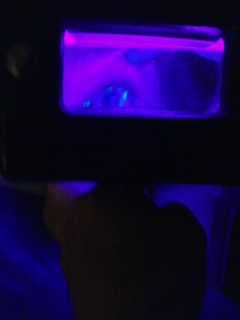 See that glowing part of his eye? That's the scratch.  And yes, I'm fully aware that taking pictures of this has shot us over to a new level of dorkiness.

I also killed Mr Guinea Pig. (on accident)   And did I mention there's a baby frog loose somewhere in my car? Either I'm going to get surprised going down the road soon, or my car will start smelling...

I think I mentioned last weekend we were planning on tying Black Out out. Dan ended up tying her up in the barn overnight, and going out the next morning and leading her to water, and then letting her go. I'm not sure if she ended up "re-training" herself during this time, or if she's afraid we will tie her out again, but she's been a dream to walk ever since. Tristen has been working on her manners again, but its a relief to him that she's walking and he's enjoying her again.

Tristen loves the beef project. He loves everything about it. Jacob just loves the raising part, not so much the showing aspect of it. But he sure does love those Herefords!!

Everyone is getting excited for the fair!

Friday morning I looked out in the garden to find these little cuties!! They provided us with several hours of entertainment.  We would find ourselves looking out the kitchen window to make sure they were still there, and provided Danny and Jacob with plenty of video and camera opportunities.  They must have had very strict instructions from their Momma not to wonder off too far, because they always came back to nap and lay down in the same spot all afternoon.  I also was amused to get to sit and watch them play with each other. Ever seen calves bouncing around in the pasture? They do this too! They also stand up on their hind legs and "box" at each other. 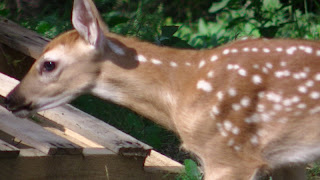 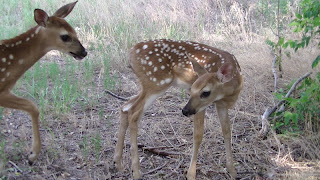 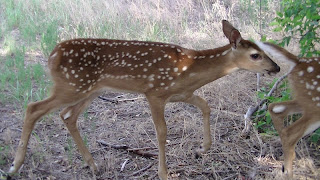 If you listen really close, you can hear the little squeaky sounds they make to each other.