Meet Black Out.
She is Tristen's 4-H calf for this year. He named her. I didn't. I was suggesting names like Daffodil and Valentine. Evidently my names didn't have the "cool" factor like Black Out does. ;) 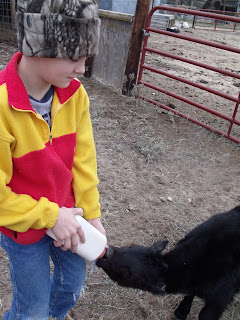 He loves her. And she loves him. Because he brings the bottle. 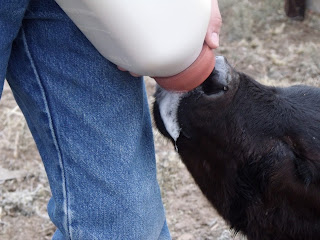 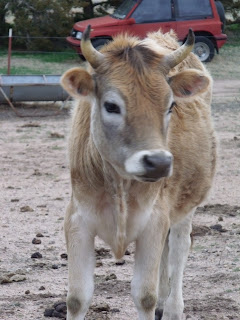 Well, this one is just happy I am now baby talking something else.
This is Chewy, our bucket calf from last year.  He remembered the bottle. He started drooling as he watched Black Out eat.
Men just never grow up.

This recipe came recently in one of my very favorite magazines.  My family LOVED it, so I thought I'd share. So easy, so yummy! 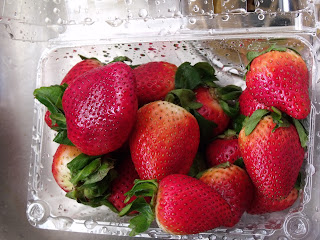 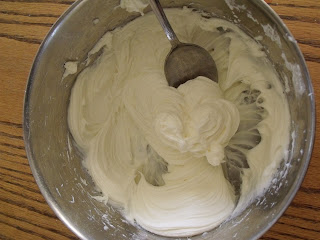 Make criss-cross cuts in the narrow end of each berry, cutting about halfway down, and pipe cheese mixture into the opening. Chill until ready to serve. 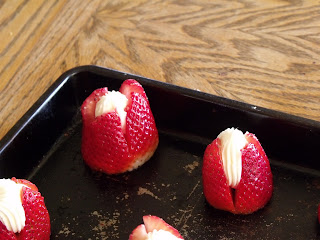 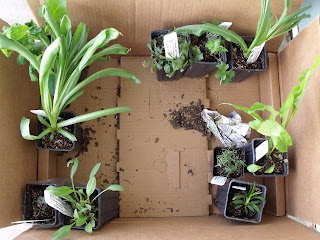 They are so pretty and green and happy, even in the shipping box!! Everything I've ever ordered from them I've been THRILLED with.


Dan worked up a new flower bed for me in our front yard, and after we figured out where to put these, I decided I would order another of the exact same pre-planned garden and mirror it right next to this one. It should fill this space in very nicely and I should have room for any other goodies I find this season! 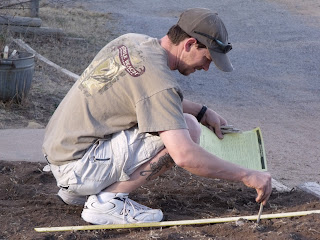 My oh so sweet hubs measured and laid out exactly where I needed to plant my plants according to the handy dandy diagram.

I can't WAIT to see what this garden does this season!! 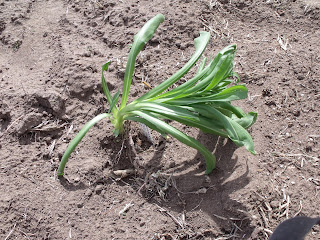 Saturday we loaded up and headed to Garden for the 14th Annual Spring Fling held by Windy Plains Rabbit Breeders Association.

It was a long and very strange day.

It was a double show, so this meant all the buns were shown in show A and again in show B.  Jacob got to show his Havanas 3 times because there was a Havana Specialty show also.

He didn't take much with him: One Californian, and 2 Havanas. Everyone else that stayed at home is either weaning babies and out of condition, just HAD babies, or ABOUT to have babies.

Jacob's Havana AVA won Best Black in the Havana specialty show. This was a very awkward and exciting showing for him, as he went up against THE ADULTS. This means the 2 breeders, Yvonne and Dan, that have help him the most, he was now competing against. It was so weird for him. Anyway, he was THRILLED to get best black in a specialty show.

And at the end, those 2 breeders who have helped Jacob so very much, walked away with a Best of Breed and a Best Opposite in ALL 3 shows!


In the regular showing, Jacob's black was beaten by a broken chocolate, but the judges kept gooing about how nice Ava was. BUT---in her 3nd showing--AVA was **DQ'ED** off the  table!! We were SHOCKED and the judge quickly apologized and brought us over to show us what he found.  She has a white line on the back of her leg.  Yvonne was close by and quickly told Jacob she has seen it before and AVA  probably scratched her leg at some point and the hair grew back white there. IT MIGHT molt out, we will just have to see.  Jacob took her right off the table and asked Yvonne if she had a chocolate buck he could breed her with. She's been BEGGING to be a mama, and he thought since she's going to be sitting at home for while, she might as well be happy and get to have babies.  That little lady has been amazing on the show table and I can't believe no one has caught it before this.

Jacob's Californian that he pretty much just threw in the carrier at the last minute just so he's have a bit more to show, won 2nd RESERVE in Show A! This rabbit is annoying.  No, really, he is. If there is such a thing as Rabbit ADHD, he would be diagnosed and treated. EVERY TIME this rabbit is shown, he escapes from the coops and joy runs down the judging table with everyone chasing after him. "Look at me, I'm FREE I'm FREE!" and "Hey Sweetie--your rex fur is looking MIGHTY fine today."  Jacob had to go get him several times while we were waiting for the Best in Show judging to start. He seemed pretty smitten with a very nice castor mini rex doe a few coops down.  This same rabbit does laps in his cage at feeding time, and chews on his feeder, and loves to flick water on unsuspecting people who are standing close to him. He's a brat.


In Tristen news, his mini rex did OK--nothing got last, but nothing won anything either. He's got a litter in a nest box and just bred some more this morning so he should be getting some nice JR's soon.

BUT- he did the youth contests for the 1st time EVER and got 2nd place in the JR judging contest!!  This pretty much concretes my suspensions I've had all along about Tristen.  He will NOT participate in ANYTHING until he is confident he knows what he's doing and that he'll do it well.
It really makes me sad that he's missed out on so much just because he worries about not doing something right.

It was a fun and long day, but filled with some of our most favorite people on earth! Rabbits...and rabbit PEOPLE...ROCK!

In honor of St Patrick's Day, here is a copycat recipe I found that tastes  ALMOST identical to the shakes Tristen and I love!!

Combine all ingredients in a blender and blend on high speed until smooth. Stop blender and stir with a spoon if necessary to help blend ice cream.  Pour into 12 ounce cups, add a bit of spray whip cream, throw a cherry on top and ENJOY!!

Today we rest, after an insane, intense, JOYFUL, and EXCITING weekend of basketball, where we watched our high school girls bring in the 3rd place trophy!
I won't even try to detail everything out, but some of our highlights included: a trip on a chartered bus, where I  added to my growing list of things that make me yak, or ALMOST yak, face paint, naked chested high school/jr high boys just OOZING with school pride, posters, windshield paint, a motel stay where there were probably 10 other families from our county, sister hugs, Shamrock shakes from McDonalds...(Tristen and his mom just might need a 12 step program for our Shamrock shake "problem")....I could go on and on, but I won't. Be thankful. But here are some of my favorite pictures: 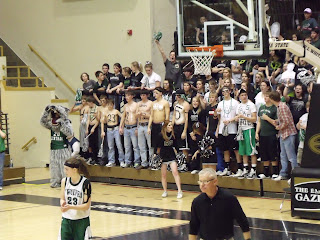 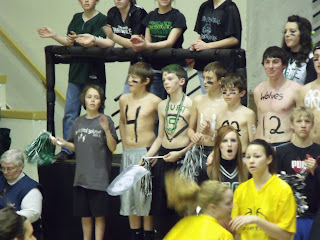 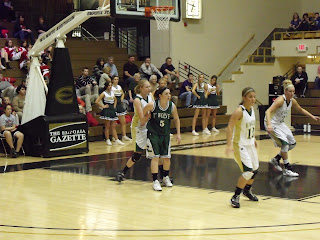 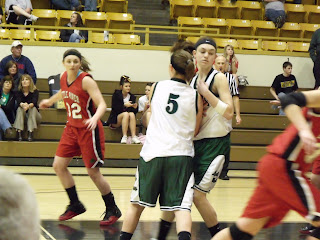 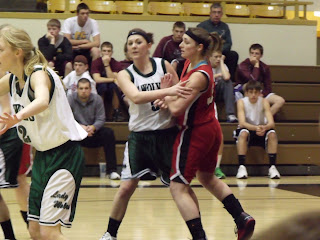 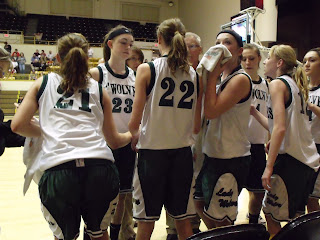 It was so much fun with many memories made and today finds me kind of sad basketball is over. Can't wait until next year!!

My hands hurt  from clapping, my voice sounds like a 90 year smoker, my throat is scratchy, my husband will probably have bruises on his legs from me grabbing his leg, and I may, or may not have peed my pants a little bit towards the end of the game.....BUT!!.....The LADY T'S ARE STATE BOUND!!!! 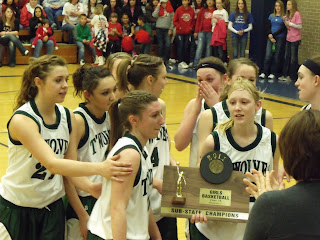 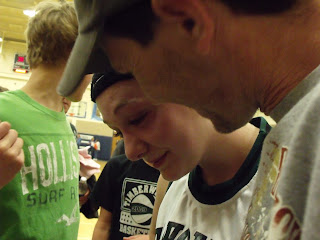 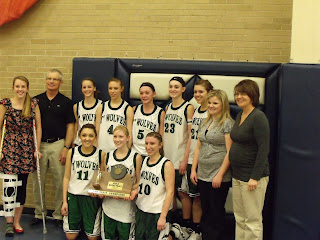 2011 SUB STATE CHAMPS!!
The final score against St John was 38 to 35. It was a CLOSE game and until the last 2 minutes, I didn't think they were going to do it. It was an AMAZING game and an amazing moment in time to be there to watch my sister come off that court.
One I don't think I will ever ever forget.