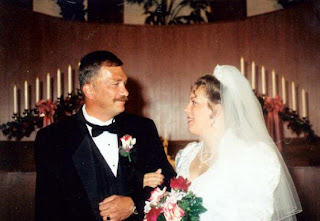 To this guy!! The guy who was half responsible for bringing me into this world, who taught me to love my roots, that's it's ok to have ice cream sandwiches and chocolate chip cookies for dinner sometimes.The guy that accidentally kicked me off the bed the day they brought newborn me home from the hospital. The guy that never let me fail and told me to "pull up my bootstraps" and to "keep plugging away" more times that I'll ever be able to count. The guy whose body gave out, long before it should have, but failure still wasn't an option so he put his mind to work when his body just couldn't any more. The guy that looked very handsome in his police uniform, and even more so in the tux on my wedding day.  The guy that become "pa-pa" and drove around bumpy pastures just to satisfy a 2 year olds request to "see the cows" and watched baby boys with earaches and croup so their mommy could go to work.  The guy who let a family live a dream. The guy I watched pull start a rototiller and till his garden 4 days after open heart surgery. The guy whose candy jar is NEVER empty. The guy we laugh with over things that really are not that funny, but it's how we cope.  The guy who never ever gives up.

And to THIS guy: 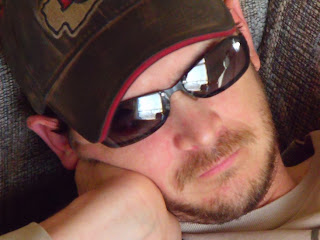 A month or so ago, Tristen came to me and said "I don't think I want to do rabbits anymore." That's a BIG deal at our house! But a combination of some severe bad luck mixed with some bad mommas and peanuts, had him ready to throw in the Mini Rex towel. That guy tried for *2* years to get his program going, with NO LUCK. He's watched his dad and brother take off running, while he stayed stuck in the mud. I didn't blame him a bit. He gave all of his Mini Rex to his dad.
A few days later:
"Well, I think still want to do rabbits. Maybe Dutch. I'm really interested in them."

Lo'and behold, later that night on Facebook, a Dutch breeder and judge we know was advertising she had a jr buck would be a great 4-H project.  Hmmmm.

I contacted her and made arrangements to pick him at the Wichita show.  The day before we were to leave he showed me a picture of a blue Dutch. "I'll start with Blacks, but I'd really like have a blue someday."

So we go and meet Briony at the show. She shows us the little buck, who we all instantly love, and then...then pulls out this beautiful baby BLUE doe to show us. How funny is that? We came home with both of them.  He also bought another baby black doe from breeder Bob Bergene. He's got nice little trio now to work with, and has a blue sooner than he thought he would. 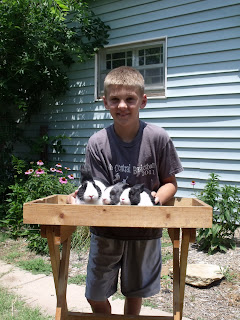 He got to show the little black buck at the Wichita show, and won Best Opposite Sex with him.
He can't wait for them to grow up.  Next year's show season should involve a lot of Jr Dutch!

This weekend was the show we had been looking forward to for months. It's one of our favorite shows at Wichita. It's a double show, one put on by the Sunflower club, the other put on for the KSRBA Scholarship fund.  And there are specialty shows the night before, so you can potentially show 3 times.

I guess I should probably mention I woke up Friday, the day we left, with a scratchy throat. Just annoying. Nothing bad.  A while later it was a full blown sore throat. By noon, as I was stumbling through the hunting section at Wal-mart with Jacob and I was having to pump myself up to even swallow my spit, I realized I was very sick. Like "I want my Mommy" sick.  So I got Jacob out to the car, drove to the motel, checked in, crashed in bed, and called my momma, who promptly took control and made things better by calling my Dr and sending a bag full of meds up with Danny just as he was packing up to head up our way. Sometimes only a mom will do.
BLAH. I was so annoyed that I was SICK on our big weekend get away.

Anyway, Friday evening Jacob showed in the Prairie Winds Havana Specialty show where he got Best Black with his Jr buck, Rufus.  It was nice for him to hear lots of good comments about his Jr's--they just needed to grow up a bit, but I think he's defiantly on the right track.

Saturday at the Sunflower show, we anxiously waited for ALL the Havana's to be judged. Havana numbers have really grown.  It felt like there was 1000 of them, and I lost track of what belonged to who and what and where Jacob's were. In the end, while we were holding our breath,  Jacob's Jr doe, Pink, was awarded the Best of Breed prize, with the Best Opposite going to his friend Madelynn. Pink also got looked at twice and long and hard during the selection for Best In Show at the end of the day, but no such luck this time!


Later in the scholarship show, Jacob's friend Tyler took the Best of Breed with a broken, and Jacob's Jr chocolate doe got Best Opposite.

I was thrilled to witness a wonderful camaraderie with the youth Havna breeders. Jacob, Tyler, and Madelynn were never far from each other, going over each others rabbits, asking questions, giving advice, asking advice. Jacob had hauled a few rabbits to the show for Tyler to look at to buy, and he ended up buying 2.  Later, Jacob and Madelynn traded stock, because each of them had something the other wanted and needed for their programs. I love it that they are turning to EACH OTHER and not just the adult breeders, for support.

You can also tell exactly when and where the Havana breeders are at a show..youth AND adults. They cheer VERY LOUDLY and give candy for the rabbits first off the table. (last place)  It's just another way to have fun and show support. =)

(I have news on Tristen, but I think he deserves a post all of his own, so stay tuned!)

Houston, We Have TATORS!

Danny and I were tinkering around the garden this evening, just chit chatting.  He was checking out the potato plants, I was cussing the grasshoppers.

"Guess what?" he asked.
"What?"
"I'm going inside and gonna have me a baked potato for dinner."

And then he whipped this out. 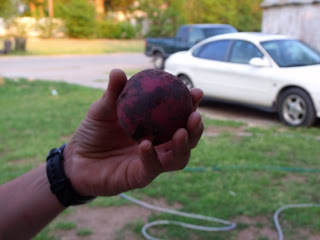 He had just stuck his finger into the top of the dirt and popped it out.  It's a Purple Viking.  It's the first time we've planted this variety.   He just brought me a bite and oh mylanta--it's heavenly.

Hopefully there are many many MANY more out there!!!

In bunny news we've had a very successful breeding season. We have never bred this many does before, nor had this many litters. It's nice to be able to be really picky about the stock we keep, and Jacob's getting really good at picking those out.  We've also had some really strange things happen this season.  We've had 2 black babies born with incorrect eye color.(BLUE! They are BEAUTIFUL regardless!!)  And we also had a first time mom get a little obsessive about cleaning and chewed off part of her babies ear. (It's hard to get upset at them for "loving" their babies so much. Some of them are just a bit OCD about it.)   So while this boy can't be shown, he can stick around for breeding stock.  We've named him Crack, because as his ear grows, the "crack" in it gets deeper.  He's a bit homely looking, but is very sweet. And it's never hard to pick him out from his litter mates! It was actually just tiny little "notch" when he was little, but as his ear has grown, so has the crack. 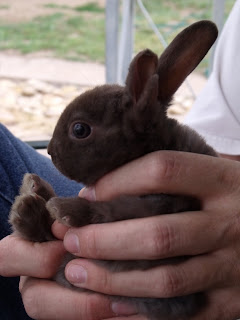 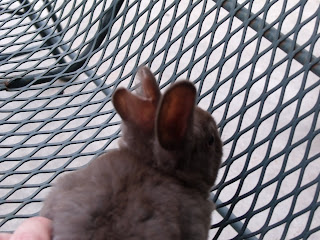 It's the first of June and we have already lost 2 juniors to the heat. It may be a very long summer. Both these were from a Californian litter. Rabbits are very intolerant to heat and will check out pretty fast.

Danny braved the high winds over Memorial weekend and shimmied up the tree to get on  the roof to install a soaker hose on the bunny barn roof.   We had plans to re-roof in white tin, but that just didn't happen.  Water on a metal roof will drop the temperature down quite a bit. Last year we used a sprinkler on one side  and it knocked it down 5-8 degrees. We are hoping with it running down both sides it will help even more. We normally use frozen water bottles in their cages, but seeing as how our freezers are full of FOOD, and we don't really have the room to freeze the number we need, we will only be doing that for the buns OUTSIDE of the barn. Summer time with rabbits is a yucky time. 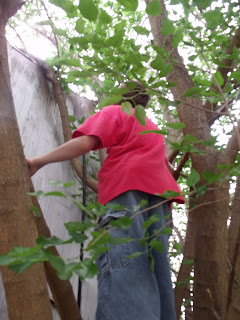 Jacob stood guard, promising he'd come get me if he thought an ambulance was needed. He also attached different tools with rope and Danny would hoist them up.  Sometimes--SOMETIMES boys are smart! ;) 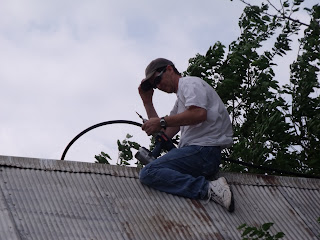 Gotta keep one hand on the hat at all times. 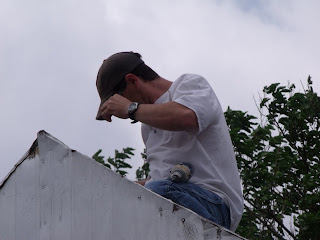 This probably should have waited until a different day, but he got it up and it works like a charm. I'm sure we will be trying it for real sooner than we'd like.

We've got a big show coming up in just a bit over a week!! It feels like it's been FOREVER since we've been able to show.  Jacob's got a lot of youngsters to get on the table and some of them are looking pretty nice. It will be nice to catch up with our rabbit friends as well!