What happened to JUNE??

What the heck?? Is it really almost July???  The summer heat is here, and all the work that goes along with it.  The garden is going well, despite the 108 temps we've been having. Its gets a good long drink every night from the sprinkler, but rain sure would help.  Some of my flowers just are not liking it, and it really is seeming to not really matter how much I water them, they are just unhappy.
As I've talked about before, having bunnies in the summer is a full time job. Tristen hauls his next boxes of week olds in every morning, taking them back out late in the evening when its cooler.  They also take frozen soda bottles out to the moms with litters, and anyone who seems to be struggling. Some of them tolerate is like any other day, others just can not make it with out a little help.  We also run a soaker hose on the roof of the barn. The water cools it, and it keeps the temp about 10 degrees cooler than if we don't run it.

Jake just got back from his first high school football camp. He's been been walking and working hard with his Hereford, Charlie. They are making progress!  He's finalizing his fair entries, and will be taking some of his rabbit jr's  to the fair for their first trip out of the barn. He's a bit overrun with bunnies right now. I think I mentioned ARBA nationals in 2 hours from us this year...oh yes!...and now that we've had litters, they are just going to sit in the cages, and grow up, so we can evaluate and pick the best possible stock possible to enter.

Its been long summer so far for Tristen, who spends most of his summer days at our local pool. It is closed this year for remodeling, and he's just about to die.  He's finalizing his fair plans too, but things aren't going too well with his heifer, Black Out, who has decided shes going to act like a 2 year old throwing a tantrum and refuses to walk. At all.  We've backed off, and this weekend will be trying something new that was recommended to him: Tying her out, (in the barn, out of the sun!)  and making her walk to water several times a day. Sooner or later, she's got to learn, or at least pretend, that Tristen is the boss. ;)

Air-soft guns are the newest obsession for both my boys. I can not for the life of me, figure out how getting shot with something that leaves red marks all over your body can be so much fun.  Boys are weird.

Dan recently was asked to join the fair board, so this fair season will be a new adventure for him. He's keeping busy at work, as well as all his honey dos and dad, can you's. ;)

And me? Well, some days its all I can do keep up with everyone and who needs what or who needs to be where. I totally spaced of taking to their hair appointments yesterday, so I seem to be failing! ;)  I had my state daycare inspection on Wednesday. After 10 years of doing this, I still cringe when they come. Its not that I feel as if I have anything to hide, its just that a family lives here, and I think that on a state level, people sitting in their nice quiet offices, forget that at times. Because some days around here, there is  underwear on the floor and some days someone may spill milk on the counter and walk away.  And sometimes, just like you, my fridge needs cleaned out, and I tell my self every day for  week I need to get that done, only to not get it done that day.
Anyway, enough preaching!!  My inspection went well, only being sited for 3 very minor things: I need a child proof lock on one of my utensil drawers, a outlet cover was missing in my basement, and I had dishes in my sink from lunch...they came right after lunch, BTW. ;-)

I'm going to end this post with some pictures.  Last weekend I took some pictures of my brother and his little family..which is about to grow by one any day. It was fun!. I had several favorites, which I should post sometime after they see them,  but here are some that I love, and very much captures little Miss Hopes 2 year old self right now.  Probably won't be framed for the wall, but they make me laugh!

On and off past 5 years or so I've been dealing with kidney stones. Never had one?  Its great fun. Almost like childbirth when its at its worst, but when you have a baby, you get a baby. Not some freaky alien you get to flush down the toilet.

Last week, I felt that familiar pinch pain starting.  Pain got bad, but passed and I was pretty sure I had passed it.  But I've continued to feel like complete junk so I headed back to the dr today. After lab work and some x-rays it was determined I have ANOTHER stone in the OTHER kidney.  Also at my visit I learned that this weird rash I keep getting around my mouth and on my eyes is yeast. I have a yeast infection in my face.  Seriously.
I am on prostate meds..yes..you read that right...antibiotics, and now "cream" for my face. Man..I feel like a woman!!  The funk of my chin and the dark circles under my eyes are REALLY bringing out my features.

It could be worse, I guess.

Friday afternoon we headed out to spend the night in Wichita. This is one of our favorite shows. Its a double show, put on by the Sunflower RBA, and the Kansas Rabbit Breeders Association. There are also specialty breed shows Friday night, after set up, so we always head up early.  This show is always big, with ALL of our favorite people attending.

Jacob took a bunch of little Jr's, knowing they probably weren't going to compete with the big dogs. They didn't really, but he did end up getting Best Opposite Variety with one cute little black Jr doe and he received lots of "promising" "just a baby" " and " just needs more development" comments.  The fall show season should be LOTS of FUN!!!
He did win Best Opposite Sex with his little broken buck, Jagger, in one of the shows under Briony Barnes, with 109 Havanas in youth being entered. His friend, Hannah, won Best of Breed.  Hannah is from Oklahoma, and any time she's at a show, you know the competition on the tables will be fierce. She's a wonderful person, as well as a kick butt rabbit breeder! 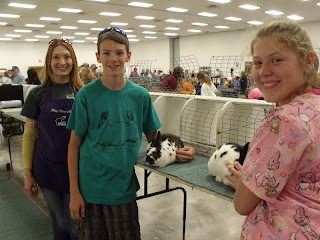 Tristen took 2 of his little blue Dutch does, as well as a few Seniors.  He didn't place in anything, but got some nice comments about his babies. Again, it should be a nice fall season for him!! Things just need to sit at home and grow.


Rabbit shows are not just about the rabbits. They are about the people and the friendships that mold and shape. This is true for Dan and I, as well as our boys.  Each boy has his own group of buddies they hang out with. Jacob's group is more Havana orientated. Older kids, sitting around, talking shop.  Tristen's group is the group that follows around a 16-17 year old boy.  This boy does magic tricks that boggle your mind, and he's always up to put on a demonstration for the kids.  He also can dance like you wouldn't believe, and they spent hours in the hallway, trying to figure out how to dance just like him.

Another reason this is one of my favorite shows of the year is the FARMERS MARKET they have right outside! I believe they have this every weekend, but my favorite thing to do during this show during down time is just walk though. Its held in the parking lot, and wraps halfway around the building our show is at.   This time, Danny and I were on the hunt for some local honey. In the middle of the greenhouse sales, gardeners and their beautiful vegetables,  Emu and Ostrich raisers, balloon artists, crafters, bakers, woodworkers, composted poo venders, and farmers, we found some! =)   I also was thrilled to find among lots of other beautiful plants, a gardener selling weird and unusual types of succulents.  I managed to pick only 2 to bring back home with me. 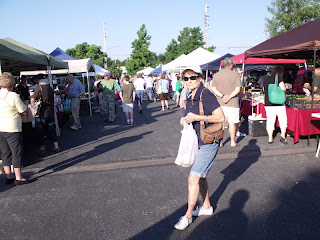 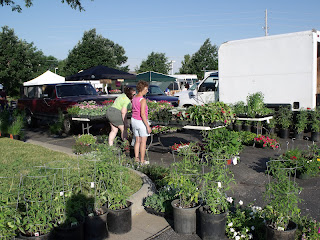 
Hope everyone has a wonderful Sunday!!

Summer is suppose to be lazy and weekends are made for catching your breath, but that sure doesn't seem to be the case here at our house.

Saturday, Jake and I headed to a neighboring town, with 2 rabbits in tow, to have them registered, and to see some of our favorite rabbit people.  Jacob got a chocolate doe, Cocoa, and his little broken buck both registered and their legs (Legs are certificates of winnings, for you non-bunny people) sent off, so their grand champion certificates (They need 3 legs to obtain GC status.) will be here in a few weeks. Cocoa had a litter this week, sired by the little buck, so Jacob is excited to have his first litter with a set of GC parents.

Jacob and Danny stayed busy this weekend halter breaking Jakes hiefer. It went really well, and she caught on fast. He even felt brave enough to take her out of the lot for a walk down the driveway. There was a bit of excitement though when she pulled back, Jacob lost the rope, and she took off. She went back down towards the lot, thankfully, instead of towards the highway.
But, honestly, she's doing better than  Black Out right now, who seems to remember what all this walking means, and is protesting by refusing to move her big ol body anywhere.

The garden is going. Still haven't gotten it completely mulched in, but everything looks good. Tristen also told me that if I don't get it mulched in, he will be sure to keep it weed-eated for me, so I don't have to worry about weeds. hehehe  Things have really benefited from the rains we have received this spring. I am not totally for sure, but I believe we have passed what we got the ENTIRE YEAR last year.


When we were over getting the buns registered, I was gifted with a huge box of Lamb's Ear. I've been wanting some, but haven't been able to locate any this year.  I have it planted over by the bunny barn now and hope it survives.  The spot over by our bunny barn has always been an issue spot. It used to have 3 nasty old half dead Cedar trees. Dan finally got sick of looking at them,  ripped the out, and I had been planting herbs there. The space is filling in nicely now on the sides, but the middle of it is pretty bare. I need to work on that.  I have planted Golden Rod, Lavender, Parsley, Spearmint, Basil, and Butterfly Weed.  I'm thinking I'll just transplant some of those to the middle, so it can fill up. 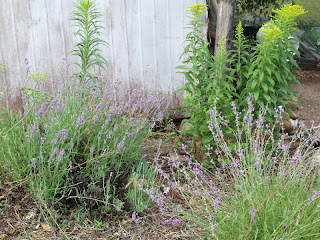 Have a wonderful MONDAY!!