Saturday we headed to Greensburg for a trip to The Green Bean Coffee Co.  If you haven't been there yet, YOU MUST GO!!
I had gotten D a gift certificate for Christmas, but we just hadn't found the time to head up there. It is owned by a classmate of his.
Anyway, it was FAB!! We each enjoyed  a bowl of Wisconsin Cheddar Soup, which was heavenly and hit the spot.  We also each tried one of their signature drinks.  The boys were pumped we let them get COFFEE.  T got "The S'more,"  J got "Red Sky at Night, Sailors Delight," (very good...it seems to have had a touch of butterscotch in it.) D got "Chocolate Lovers" and I got the "Candy Cane."
It was just perfect with good food, a great atmosphere, and great conversation.  It was one of those times that turned out exactly how I pictured in my head.  I love it when that happens.
As we were leaving, T asked if we could come back EVERY Saturday. Not sure if we can go EVERY Saturday, but we will be going back as often as we can! 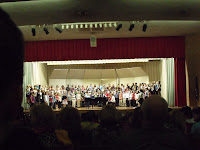 Jacob sang in Dodge on Saturday. He was chosen to be part of the honor choir. There were 180 kids!! It was AMAZING!!! 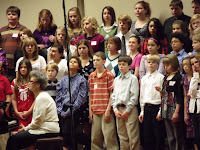 It was a wonderful experience for him and I am thrilled he got to be a part of it!  He said the music instructor reminded him of Mr. Magorium from Mr. Magorium's Wonder Emporium. He is a GREAT GUY and was fabulous with the kids! 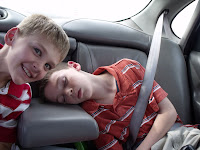 He was very tired on the trip back home and well...I guess this picture explains itself. 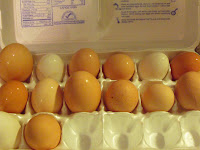 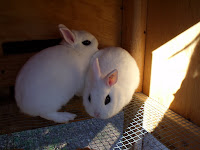 And last- Julia and Jasper. The dwarf Hotots that still would rather just be friends. I am now sure the person who made up the phrase "breed like rabbits" never actually tried to breed rabbits. FRUSTRATING!


My name is Becky, and it has been 25 days since I have used a paper plate.

I think I have broken my paper habit.  Took a bit  for my daycare kids to stop throwing our “real” plates in the trash!! HAHA  I bought them orange cups and put their names on them.  ALL orange, so there isn’t fighting about who got what color on which day.

What I bought the cups for costs less than a package of styrofoam cups, btw, and I don’t have to buy anymore for a long time.

I’ve got a very small  stockpile gathered now! My family lovingly refers to our storage shelf now as “Bruckner-Mart” HAHA

This weekend I am going to sit down and plan a weeks menu out!!

Saturday morning we headed to Wichita for a fun day of rabbit learning and showing.

The morning was set aside for little mini classes. They had tattooing, judging, showmanship, breed id, and medication.  The boys (and mom and dad, who tagged along to the classes,) learned alot! 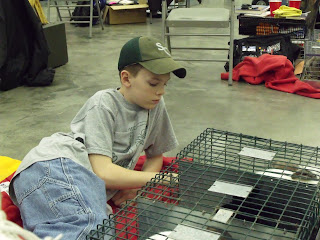 Sometimes there is just a lot of waiting around at rabbit shows!


They also had Breed ID, Judging, and Showmanship contests. (They were qualifiers for the Kansas State team, BTW.)  Anyway, J's most exciting moment of the day came when they announced he was Reserve Grand Champ for his age group in Showmanship.(There were probably 8 to10 kids in his age group)  He was PUMPED.  He also got Reserve Grand for the Judging contest, a BOB for his Cal, Tori, a Best Opposite Sex for his Cal, Truman,  and BOB for his Havana, Charlie.   J also got 3rd in his age group in a fun little quiz bowl contest they did. 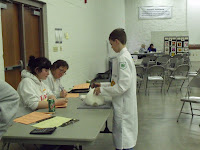 J doing showmanship. I was happy they were set up so we could watch them. I think the kids prefer NOT to have everyone watching though!

T is still alittle uncomfortable with the contest thing...I think HE thinks he just needs to figure out how they all work before he does one. He's terrified he's going to mess up and feel like a goober, so he just doesn't do them. (As a momma, its sad to watch, because I think he really really wants to join in, but is so afraid of messing up.) He did win a BOB for his Florida White, Runny Babbit and a Best Opposite Sex Variety for his red Mini Rex, Mike.   He did finally say he thinks he's ready to try showmanship next time. 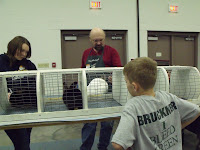 ALL of our rabbits were out of condition and smutty due to the time of year so they were pleased with what they came home with.

Just for fun they had contests for the adults too, and D and I both did the judging contest.  I got a purple ribbon for my score of 188 out of 200 possible. I just had to mention this because my husband only got a blue!!! HAHA  I FINALLY beat that guy at something! =)  They were going to have an adult quiz bowl, but ran out of time. Too bad...I was on a roll! 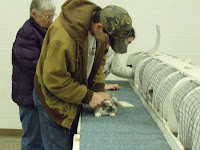 Thats me in the back the white coat, beating D. Just thought it needed mentioning again! ;)


And last, meet the newest member of the Funny Farm,  Mr Guinea Pig.  Mr G. Pig was won in a raffle by my insert word of choice here husband. (BTW, did you know the correct term for a GP is a cavy? And that they have cavy shows at rabbit shows?)  Why oh why do we always seem to come home with one more animal than we left with? Anyway, Mr Guinea Pig doesn't really seem to like our loud rambunctious family, but the boys keep trying to make friends with the poor guy.   He, on the other hand, is convinced he's been abducted by aliens...really loud aliens. 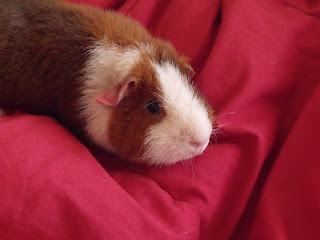 I got this in an email and laughed...just wanted to share.

No matter how badly last year treated you, just walk tall with your head high.

This is a brand new year ! 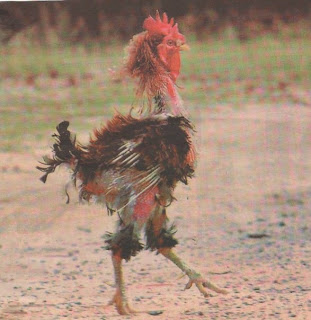 Can I whine for a moment? Really, if you won't to read about it, please, feel free to just skip this post.

I am so sick of winter. I miss green things, and hate having to put on shoes to go outside.  I miss flowers, and fireflies, thunderstorms, and the smell of sunscreen.

My husband has been taking care of all of the animals outside.  I like to think he is babying me, but he's probably just not wanting to hear me whine about being cold.  ;-)
The rabbit waters are totally frozen, so we have to take every individual crock, dunk them in hot water, pop out the frozen water, and fill with fresh water.  This process takes about 2 to 3 minutes for each rabbit we have, so its alot more time consuming than just filling up crocks and feed hoppers and then moving on. After the rabbits we have to move on to the chickens.  I feel really sorry for them as their eggs are frozen solid and split before we can get them gathered and inside.  All that hard work for nothing.

Poor D has been having to break the cow water with a ax.  Come next winter we will be investing in a tank heater.

Never fear, neighbors. These 3 mighty hunters can rid this area of any small game. Birds? No problem! (Well, unless they shoot one of the birds on my “do not kill” list, then there is a problem!) Squirrels…no match for them! Armadillos, you’d better run!!!

I’m not sure what it is about men and the hunting urge. My friend Lori and I have discussed this many times, and the only thing we can figure is it must be how we girls feel when we get a bargain on a really cute pair of shoes.

Anyway, these boys stalked this armadillo for *3* hours!! He (and I was informed that HE really was a HE because they did in fact look.) ran into a hole and they  dug him out. I started to lecture them on the dangers of wild animals, but D just looked at me and shook his head so I stopped and let them have their glory.

So, the total for the weekend was 3 birds, 1 squirrel and one armadillo.

They are all very much enjoying their new pellet guns, I’d say.