Saturday morning found us up early and loading up rabbits at 5am to head out to Abilene. This show had been iffy for us. Jacob had a football game and wasn't home until 12:45am. We ended up going, but he slept all the there, and even took a nap in the truck in between showings.

Loading up rabbits at that hour, as funny as it sounds, is one of my favorite things.  There is an excitement in the air, the bunnies know something is going on.."They have CARRIERS OUT!"..and start begging at doors and running around their cages... Its fall, so the air is crisp and the stars are big and bright and breathtaking. The fox was behind our neighbors house, doing her "bark" and after a few wide eyed glances around, we figure she's probably out every night. 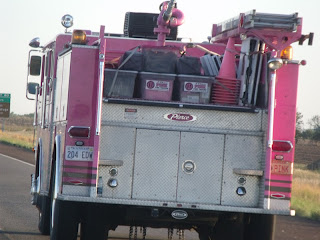 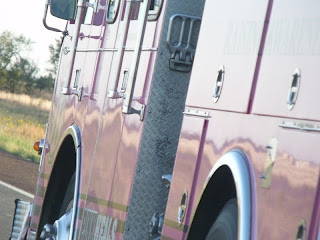 On the way to the show we passed the pink breast cancer awareness fire truck. I had seen this truck in pictures on peoples Facebook pages so it almost felt a little like a celebrity sighting. Its very cool and covered in signatures of breast cancer survivors.

Tristen took his Dutch for the first time ever. These are ones that had been born and raised in our barn and we've been itching to get them on the table.  His time and hard work, and a little frustration, paid  off!! In show A, his little black buck, Ricochet, won Best of Breed, and his little blue doe, Chanel, got the best opposite sex award.   In Show B,  Spencer, a tort buck, won Best of Breed, and Chanel took the best opposite again.

The best part of the day came at the very end. My "always along for the ride"  kid, stood around with his arms crossed watching the judge look over the BIS rabbits. I was standing next to a youth Havana breeder, chit chatting, when I saw the judge go back and pull out his Dutch. T wasn't paying attention, so I caught his eye, pointed, and suddenly his back got a little straighter and he was very interested in what was going on. ;)  He announced Ricochet has the 2nd Reserve in Show!! (3rd best rabbit at the entire show.)  Tristen got a balloon filled with cash as his prize. 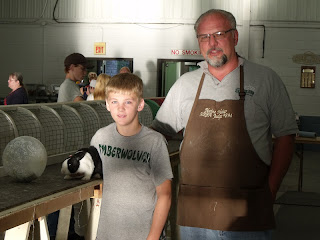 Jacob had a wonderful day too! He and his friend, Maddie, dominated the Havana table. In both shows he was awarded Best of Breed with a frisky little broken doe named Fruit Loop.  Maddie won Best Opposite in both shows as well.
Fruit Loop also got a 2nd look over during the Best In Show judging, but no such luck this time! 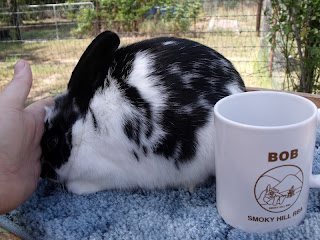 Fruit Loop has a fun story. Her mother, Golly, was Jacob's very first Havana. She's special.  She has slowed down a little in her age, producing smaller litters,  and he had bred her this spring at least 3 times, but she hadn't taken any time. I told him that he could breed her one more time, but if she didn't take again, he would need to move her out of a brood cage to a smaller one, so that a mom that could have a litter could have hers. (Think moving from the house you've raised your kids in to a cute little retirement condo. ;) ) Anyway, he bred her and 32 days later Fruit Loop landed in her nestbox. Fruit Loop. Just Fruit Loop!  So being a singleton, she grew up fat, beautiful, and socialized, and was always loved on a little every day at feeding time!  The odds of her being THAT rabbit..well, the odds were pretty low. She's been fun to have in our barn! And Golly is still in her big cage.

We hadn't shown in 3 months, except for county fair, so we were so happy to be around our kind again.

Hope everyone has a fantastic week!

A lot of our life seems to be taking place in a vehicle at the moment. Football is dominating our life..GO WOLVES!! ..I knew this year would be like this, with one in high school, one in Jr High. And I LOVE watching them play, but man oh man..these 2, sometimes 3, games a week are wearing me out. Not so much the games, but the planning ahead, needing to get off early some days, needing to do laundry/clean/shop for the next day stuff that comes with the football game evenings.

This weekend found me out of town both days. I feel like I need a day off to recover from my days off.  Saturday we took a road trip to get some groceries and some new clothes.  Jacob had out grown all of his jeans. (sigh)   And the cupboards were BARE! We saw 2 out of 3 of our nieces and nephew that live up there, and Jacob ate buffalo for lunch. 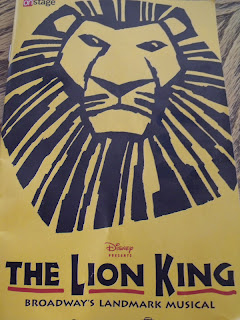 And Sunday found me up and out the door to head to Wichita to see the Broadway musical on tour, The Lion King.  While I had always wanted to see something like this, its something I would have NEVER gotten my men to go to, nor would have I spent the money to go by myself, so I was happy when my friend, Melanie, brought it up. It was everything I hoped it would be, and much much more. It was AMAZING. 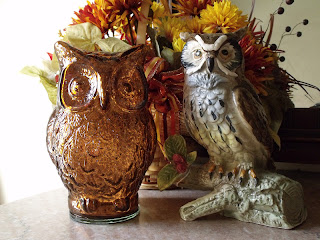 I really enjoyed girl talk with some great girls, some good food, lots of laughs, and a little bit of shopping. I was able to snag up two owls that  begged to go home with me!  I've always loved owls. They remind me of my grandma, who collected them, and its a lot of fun right now to be an owl lover..they are really popular and EVERYWHERE! The brown guy I got on sale, (whoohoo!) and the other one I found tucked on a shelf at this awesome antique mall we went to.

This week will find us a football games, and this weekend will kick off our fall show season. Let the fun begin!

Have a wonderful week.

My Boys of Fall

Its that time of year again! Football season. And living with a house full of boys, I've come to just come to accept the fact that the bigger the bruise, the higher the hi-five. 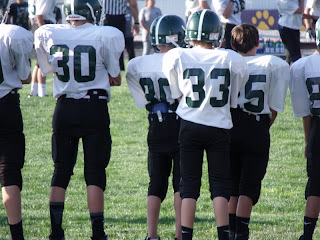 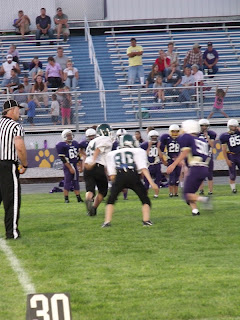 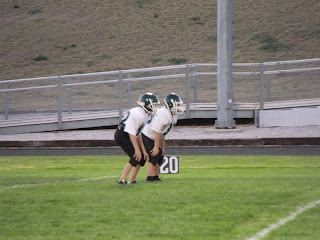 Jacob is playing his first year of high school ball. I had a funny teary moment at the first game. Every one lines up, the drums beat, everyone claps and screams as the boys run by.  I looked around and was like what the HECK am I DOING HERE?? Do I REALLY have a kid out there playing BALL??? 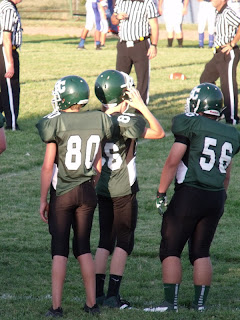 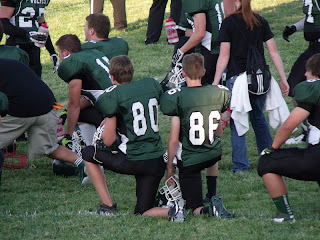 I did get some pictures of Jacob playing in the game, but my camera just stinks at taking night time sports pictures. *sigh*

Anyway, both boys teams won their first games, with the high school team beating a huge rivalry 0 to 50 or something like that.

Another fall "thing" going on around here is hunting season. Jacob has been out dove hunting, and his really anxious for deer season to get here.

September is finding us running our tail ends off, with at least 2, sometimes 3, football games a week. We also have something going on every single weekend this month. We decided to skip the showing part at the state fair this year, but the boys are both sending 4-H items--T's Monster Jelly, as well as his peanut butter cake, and Jacob is sending a photo.