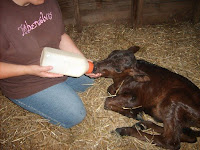 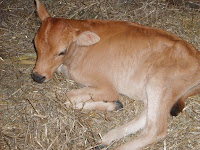 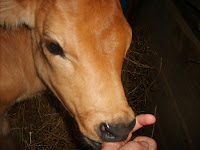 No, don’t adjust your screens. Those are defiantly NOT black and white cows in the pictures!! There is also one more than we had planned on! ACK!
We headed out Saturday for the big day to get our baby cows. We got there, and they bring out JERSEY CALVES. D called the guy we were buying them from—he was out working on something, somewhere, and told him we had come for HOLSTEINS and he wasn’t real happy about having to bring home JERSEY’S.(Later, D told me that he thought: Oh sh*t..Becky is going to FLIP when she sees a BROWN calf instead of a B/W one!! Hehe) Anyway, after a little talking, basically the man gave us a 3rd calf for free. I think it was just a misunderstanding—he had just sold the last of the Holstein calves. I would have taken the Jerseys anyway, as I was APPALLED by the condition these babies where in.
So, we made some frantic calls home to mom and dad and to our cow buddy, Trent, who met us in the driveway. One of these babies I didn’t even think would make it home she was in such bad shape. However, when Dad and Trent opened the trailer up, they assured us that though they needed a bit of TLC and some regular bottles, they seemed to be ok.
D and I are now getting up at 6am to head to the farm every morning to give the first feeding, and then the boys are helping us out with the evening feeding. It’s been very scary and challenging so far, but I am really enjoying it…now.
My dad made me laugh after I had calmed down a bit...”We did bucket calves because we HAD to….you went looking for them and PAID MONEY for them!” =-)
So, we now have:
Paige. She is the only heifer and the one I didn’t think would make the trip home. She’s probably 4 or 5 days old. She’s been slow to eat, but every time she eats she’s been eating a little bit more. She is a mess, but we are very slowly seeing improvements. She’s black/red with a white little tip on her tail.
Chewy. He’s the oldest. He’s on the skinny side too, but he’s been woofing down his bottles and chewing on some hay. He bounces around and chews on EVERYTHING!!
Jersey. He’s the baby at just a few days old. He had just arrived there so he seemed to be in better shape. All he cares about his is bottles and his naps at the moment.
D asked me on the way home if I was totally disappointed we didn’t come home with Holsteins. Nope. I wasn’t even that upset we were coming home with Jerseys. I was just upset because someone had not taken care of these guys.
Not real sure what we are going to do with them. (Except cut their nuts as soon as it’s time!! Jersey bulls have a reputation of getting nasty. The cows, however, are known for being sweet and gentle.) D tosses around different ideas every day on what we can do with them.
Funny T story: While they were loading up the babies, T was climbing on the trailer. He looks in at Paige, and said “YEAH, RIGHT!! THOSE GUYS SAID THEY HAD BEEN FEEDING THEM BOTTLES! LOOK AT SKINNY THEY ARE!” I turned around, and there was the guy. I wanted to die and give my kid a high five, all at the same time!!

So anyway, Jersey cows are most known for Elsie the Cow, the famous mascot of Borden Milk.. Her face appears on cans of Eagle Brand Sweetened Condensed Milk. They are small milk cows with a high butterfat content in their milk.

And so begins another adventure at the Funny Farm!!

And the NEXT cows we bring home BETTER be black and white! =-)

Mom wants to see what you are going to DO with all that milk. And i'll buy you a bucket of black and a bucket of white hair dye :o) lol enjoy your venture! it has brought lots of smiles from dad...shakin his head bout adopting animals...seems u r following in footsteps here....apple didnt fall far from the tree??

Dur...It took me a minute to figure out why you would buy me black and white hair dye! HA!

They are pretty cute! Hope you have better luck with them than your last batch of chickens!! Enjoy