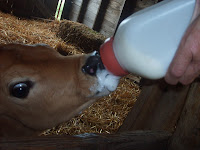 Well, the boys survived Wild Horse Camp. Not so sure about Melanie. She looked pretty beat when she dropped them off last night! ;-) Both seemed to have had fun, though T was a bit dramatic about missing us. He told us that he cried himself to sleep the 2nd night. I asked him why he was crying and he said because he just wanted to come home, and the stupid pictures wouldn’t turn off. “What pictures?” I asked. “The pictures of my mom and dad that kept popping in my head.” Awww…. Anyway, he says he doesn’t think he wants to go back, but he’s got a whole year to forget about missing us, ( as well as maturing a whole year.) so I think he’ll be back. He has lots of stories to tell and made lots of new friends. He left his 4-H bag with all his stuff he made SOMEWHERE, so I hope we can track it down. He was really upset about it. He might have left his stuff all over camp, but he somehow made it home with someone elses camp shirt,a pair of someone’s socks and a towel I’ve never seen before. Nice.
J had lots of fun too, but this is his 3rd year of going, so he’s just a pro now. He really likes making new friends, and then seeing people he knows when he plays ball and stuff. I noticed when I was helping him unpack he’d packed 2 different types of deodorant as well as 2 types of cologne. Girls defiantly were on the mind this year.
D and I found ourselves childless for the first time in 11 years. We have been away from the boys, but it’s never been for fun. It’s been because someone has been in the hospital or something like that. And never ever for 3 days! We went out to eat for most of the meals and I was amazed at how clean my house stayed!! However, when they came home, leaving trails of suitcases and sleeping bags, and the laundry started piling up with wet and stinky clothes, and 2 different stories were coming out of 2 different mouths at the same time, I smiled and realized this is the life I prefer to have.

I was blessed with the most amazing gift this week. My Aunt Karen is moving to Texas and gave me the sideboard that’s been in the Burt family forever. I’ve seen this thing the entire time I was growing up and never dreamed it would be in my house someday!! I run my hands over the marble and think about how cool it would be if I could see the things it has seen over it’s time. I know it would have lots of stories to tell!! I need to find out a bit more history on it sometime. I don’t know who the one that bought it originally was or what year. We made sure it was signed on the back of the marble. Every time it’s moved it’s signed and dated.

Monday evening we went out for pizza with my cousin, Joy and her husband, Loren. I haven’t seen her since 1994, so it was nice to sit and catch up with her. Her mom and dad bought a house in Wilmore so I think she will be here a lot more. It was fun to sit and remember all things we had done as children.

We lost our other calf on Monday. It was not a surprise as we had watched her go down hill. We had gotten another dose of antibiotics, and kept in contact with the vet, but it didn’t help. The one thing everyone seems to agree on is that she had something wrong with her, whether it have been a birth defect or some sort of damage from a hard birth. Everyone seems really concerned we are going to give up. We are not. I am very sad/frustrated with the losses we’ve had, but given the condition these babies were in when we got them, it really isn’t a surprise. We’re still plugging away and D seems to already have a new plan. We still have Chewy, who is confused, I think. He thinks he’s either a large dog, or a small horse, but defiantly doesn’t know he’s a cow.

I did not find T's bag when we cleaned up, and I went back to the burb myself and looked for it. You might call Jan, cause his name SHOULD have been on his jumprope, so if it was in the bag, they will know whose it is. If we can't find it, I have a bag that I will give him, but it doesn't have the cool jumprope he made. :-( I would be surprised if he really cried himself to sleep, no one mentioned it to me (my boys or his counselor) And he didn't look homesick while he was there--I hope he goes back next year!

Yeah I called the Extension Office and they were going to see what they could find out. He was pretty upset...he said there was candy in there!! HAHA
Everyone says he looked like he had a great time. T's a bit of a drama king sometimes! He was already talking about "next year" so it must not have been TOO bad. =-)* I think he really just needed some sleep...we had a really hard time getting both of them out of bed this morning! He is still telling me stories about things they did!