Bunnys, Gardens, and Bugs, OH MY!! 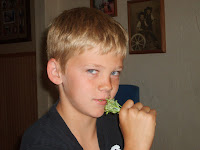 Wow! Life seems to be mostly happening in our car lately. We always seem to have somewhere to go or be.

We had a great weekend. Saturday we got up early and headed to Wichita to meet a breeder to get a couple of rabbits. His name is Bob and he’s from up by Kansas City. It’s hard to find a way to get to him and his rabbits are AWESOME so we jumped at this chance to meet him here, and also to go to a show just to see how it all happens. WOW—there were about 500 rabbits there. Rabbits being judged, rabbits for sale, rabbits cooked and ready to eat. There were small walkways is all. It was a maze of buns. I didn’t get to get over to the “rabbit restaurant” to see what they had. I was wanting to see how many different ways they had rabbit prepared!

Anyway, we came home with a Florida White named Bunny, and another Dwarf Hotot named Julia. The Florida is Tristen’s 4-H rabbit to use as his breeding project for next year. The dwarf is mine. I already have one—he placed really well with Bob at the national show and I’ve wanted to get a doe to breed him with, but Julia is only a couple months old so it will be a project for next spring I think. The original plan was I would show Jasper while the boys showed their rabbits, but then Jasper pulled his entire toenail off in his cage one day while he was spazzing out during feeding time. That’s a disqualification so his show career is now over, but he can pass on his awesomeness to his babies!!
It is so funny to listen to some of these people talk. I asked Bob how many rabbits he had. “Well, right now I have about 300, but I try to keep it around 150 or so.” Holy bat-balls! Can you imagine??

At this show there were lots of booths set up outside and we walked around wandering for a bit. There were all kinds of homemade goat milk soaps, which I don’t know why, but I have this over whelming urge to make some of this someday. There was also lots of canned goods, home grown veggies, homemade breads, farm eggs, Emu eggs, flowers, plants, woodworking booths…it was so much fun!!

The garden is kicking butt. It thrills me to go out and look at it!! I have lots baby green tomatoes and we just harvested the lettuce. YUM!! The giant pumpkins are HUGE!! I can’t wait to see how big the guys can get these things! We are fighting potato bugs, and have Sevins to use on them, but D and I are not real fond of the thought of using chemicals or pesticides. We might just have to do it though. We’ve been paying the boys 5 cents for each one they pick off. D thinks he might have to lower the bounty though, as the boys are taking all his cash.
T had his very first broccoli harvest!! He had 2 very small stalks, but he said it was the best he ever ate. His cabbage is getting huge!! He doesn’t like cabbage, but its super fun to grow!

300 rabbits?? OH MY! But the way it's going, you won't be far behind!! Hope you enjoyed the quiet without the guys!! BTW--is it tacky that they actually serve RABBITS to RABBIT lovers?? ugg!

HAHA! I kinda of find it...disturbing...I guess, but most breeders actually eat the rabbits the don't want. Out of a littler of 8, you might only have 1 or 2 you could show so you have to do something with the other ones. (Leo Oller told us he used to make his "yard bunnies." He just turned them out in his yard!) J and D wanna try it with a couple of our extra ones. ACK. I have a hard time thinking about eating something I've snuggled with and worried about on cold and rainy nights. I like meat and am not in denial about where it comes from, but...!!
And no no no no! I can't imagine having that many rabbits. We are at our limit now!!
Hope your having a great day!!