Jacob recently had a very fun school project. The goal was to build something to keep an egg from breaking from a drop off the school roof.

Jake built a wooden cube, and suspended the egg, which was enclosed in foam from an egg carton and wrapped in a cloth pouch, from rubber bands. I was immediately impressed with this, as the rubber bands were very tight, and the egg pouch didn't move hardly at all when the cube was turned up and over or bounced around.


BUT--would it survive a trip off the school roof?

To slow down the cube he made a parachute out of a trash bag.  It slowed the cube down just enough not to slam into the ground. 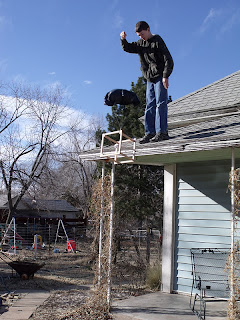 The result? IT WORKED!! EVERY TIME he tested it resulted in a nice and cozy, crack free, egg in the end.

I was pretty impressed--and HE was excited as when lots of his class mates were heading the internet for ideas, he used his noggin.

It finally feels like winter here in Ks. I know we've been really lucky with a really mild winter so far, but it sure doesn't stop me from whining about the cold!  60 days until spring!

Fun project!! Grant used some stuff from his dad's shop too, including some type of airplane foam. .not sure why we have THAT around here, but whatever! It would have been fun to go watch!