I have no words to describe our first ARBA Convention. Amazing just doesn't seem to do it justice.

First off, it was a blast to finally put faces to names you only see on pedigrees, on facebook groups, or read about in newsletters.  Jacob got to meet someone from CA who has helped his program tremendously, when he purchased a rabbit from her last convention and had someone local pick it up for him and haul it home. Julie is an amazing and fun lady! 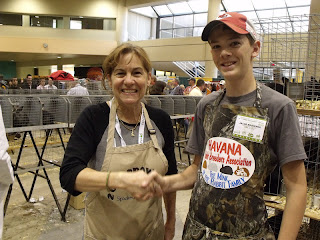 To be with people, who are just as rabbit crazy as we are, for DAYS straight, was a blast!  I walked in to the convention building, smelled THAT smell of 21,600 rabbits and thought "I am NEVER leaving here!"

This was our first convention, and we had NO expectations. We were just happy to be there at our very first ARBA convention!  We were hoping to stay in the middle of the class, and were fully prepared to have our hind ends kicked repeatedly. For all you non-rabbit people, this is the Superbowl of bunny shows. It doesn't go any higher. Think Westminster.

Tristen walked away with a 2nd place Jr tort buck, which was AMAZING.  He also had several 5th, 6th and 7th place. He has only been actively breeding since March, so he should be pretty pleased with the results! I can't WAIT to see the stuff he's got coming up this show season!

Finally, after 9...9!!!..hours of standing around watching the Havana judging, (The judge stopped once to use to bathroom. That's it! No break. No meal.) they announced that the best of breed was....JACOB'S BROKEN BUCK!!!!!  I don't even remember what happened much after, except I started crying and ran to call my momma!! ;) 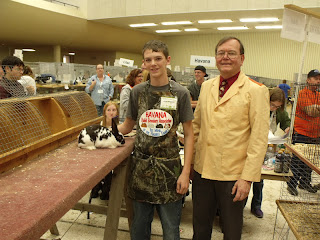 Gunner is Jacob's BIS winner I blogged about 2 weeks ago.  Home bred, home grown, and now a national Best of Breed winner.


This meant that Jacob would be putting a rabbit up on the Best in Show table. Yikes. The entire thing felt like a dream to us.

(Melanie--they did BIS judging where Lion King was held, and it was a full house! =) )

They do BIS a little different than we were used to at regular shows. They break the rabbits up into 4 groups, and 4 judges come in, each judging their group. (Jacob was in group 3.)  And then they each pick the best rabbit from their group, announce it, and then another judge comes back in, goes over those 4, and announces the best in show.  The judge that had Gunner got him out not once, not twice, but 3 times! I can't even begin to tell you what that feels like to watch. In the end, the best of group 3 was a beautiful Tan.  It didn't even matter...we had had a bun up there! As we were going down the hallway coming out, the group 3 judge came out beside us.  Danny stopped him, shook his hand, and told him that our son had had the Havana. He informed us that Gunner had been his 2nd choice, and that he just needed to be a bit more finished over the top and he would have gotten it. He had everything else needed. =) I don't know if that makes it better, or makes it worse! HA!! 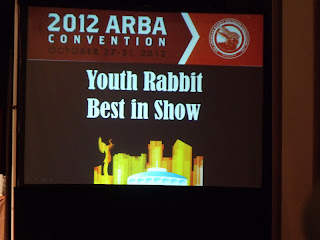 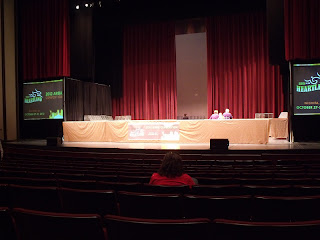 The boys had to go back to school today, so we left last night.  Jacob was pretty bummed to leave the bubble of convention. Danny and I went up today to clean coops and feed and water, and...get this...take Gunner to get a professional picture taken with his awards.  Bet you didn't see that one coming, did you? Add that to the list of things I never EVER thought I'd be doing!!


Here are some various pictures I thought would be fun to share with you. 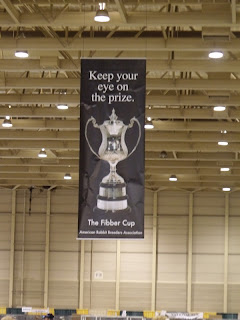 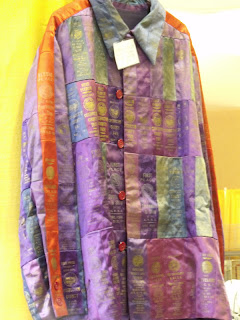 It will be hard to ever top this experince, and I am pretty sure it can't be done!!


But we are sure going to have fun trying!!

1. I am sick of fundraisers. Jacob has had 4 since school started.

2. My front porch looks like it could be on Hoarders. Must get that cleaned off this weekend.

4. In the past week, Jacob has gotten a car and a job. When did this growing up happen and where was I?

5. I need to find a finger food for a banquet Monday night. I hate coming up with finger food. So much easier to come up with a side dish.

6. The steers for the new 4-H year will be arriving this weekend. I haven't recovered from the fair and already have new ones have arrived.

8.  I love fall. The mornings are beautiful.

9. Tristen's last game was last week. I love football, but sure am enjoying seeing him getting off the bus after school and not having to worry about Friday practices.

10.  Our poor sweet Anna kitty got the snot beat out of her late last Friday night by a big ol tomcat. She's been limping around pretty good ever since.  =(

Hope everyone has a wonderful weekend!!

10 o'clock  Friday night, after a mist soaked football game, Jacob and I headed to Hutch to meet Tristen and Danny for Kansas State Convention.  About 15 miles in, I thought about turning around.  The fog was ridiculous and I'm not  a real confident nighttime driver anyway.  We finally got in around midnight, after a couple of pumpkin spice cappuccinos and lots of conversation and shot nerves!

A big part of the convention is the youth royality. This is a contest based on a 5 page written application, an oral interview, breed ID contest, judging contest, 200 question written test and showmanship. Those scores are tallied, and the winner is the that age group royality. There is lord/lady, prince/princess, duke/dutchess, and king/queen.

This was a weird and awkward year for our house. Tristen had been persuaded to try it, so...that meant both of my kids were competing for the same title.

When the winner was announced, Tristen didn't make it to the top 3, but Jacob was awarded runner-up Duke, and come to find out, the top 3 were only 3 points away from each other.

In showmanship, out of 15 participants in the 12 to 14 group, Tristen walked away with a 4th place plaque and Jacob was 2nd Runner up.  This was Tristens second time doing this..EVER!  He's pretty pleased with himself and has big plans to start doing more of the contests. 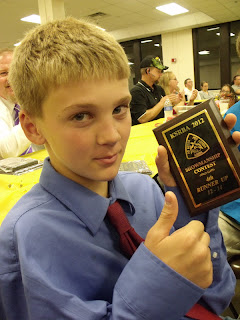 As far as the show went, it went just as good.  Jacob was awarded best of breed Californian, Best of Breed Standard Chin and, his most exciting, Best of Breed and Best Opposite Havana. There over 60 youth Havanas entered!! 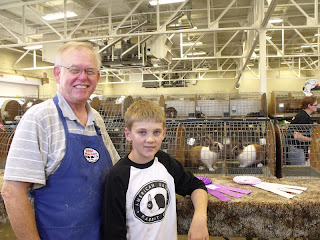 Tristen won the Best of Breed and Best Opposite Dutch with a pair of young torts.  He was SHOCKED when judge Don Jackson announced them as the breed winners.  So shocked,  he temporarily forgot that those where HIS torts the table and turned and asked his dad "whose are those?"

Jacob's big moment came when, during the best in show judging came and they had done first and second reserve, and Judge Mike D'Amico said "And now... best in show...goes to a rabbit I fell in love with yesterday....the HAVANA."  =)

The broken jr buck who won this was born here in May, and is fathered by Jacob's double BIS winner in Russell. Home bred, home grown,hard work, equals a HUGE feeling of accomplishment. 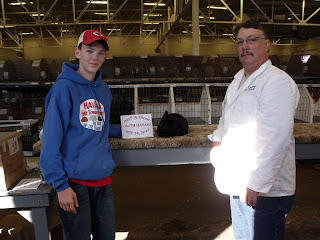 After the BIS judging, the Prairie Winds Havana club had a specialty Havana show.  Jacob was awarded the Best of Breed for that show too, with a cute little black doe as well as Best Opposite Sex, with a little chocolate buck, who almost got left at home because I skipped over him on Jacob's entry list and forgot to enter him. Both of these were bred and raised by Jacob also, so between that, and the high Havana numbers, Jacob is feeling pretty pleased with the way things are going.

Our big National convention in Wichita is in less than 2 weeks...We are READY!!

This was shared with me by another football mom. I love it!


In the fall, it is time for the football season.
Mothers go to the game, but for one reason.  What is the reason?
Let there be no denial.
It's to see if her son gets up from the pile!

Oh, she may have lots of pep, and do it all the cheers.
And she hasn't missed a game in many a year.
But she doesn't do it just to keep in style.
It's to see if her son gets up from the pile.

She keeps track of the score and acts very alert.
Wondering how to get those bloodstains out of his shirt.
She always sits on her seat right on the aisle.
Just in case he doesn't get up from the pile! 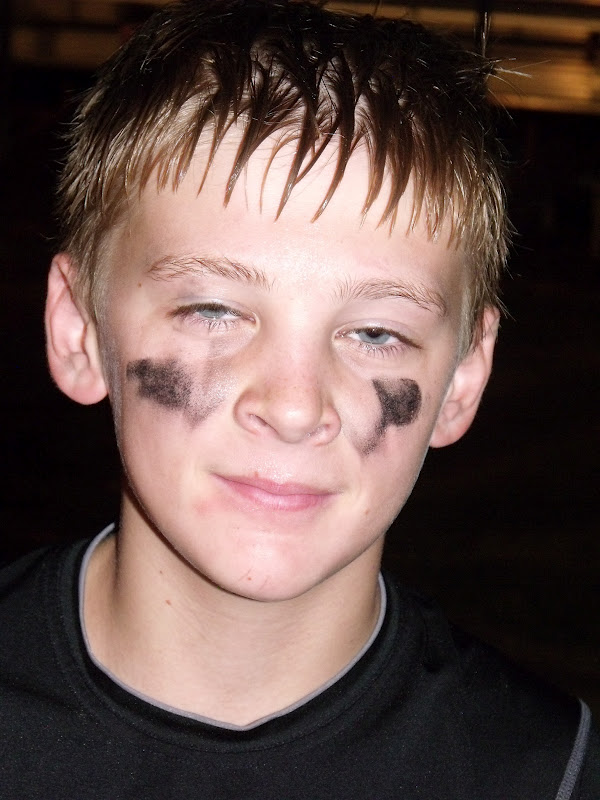 When the whistle blows, she strains her eyes
For the jersey number she's memorized.
She'll sit quite still, heart stopped all the while,
Til' she sees that number get up from the pile! 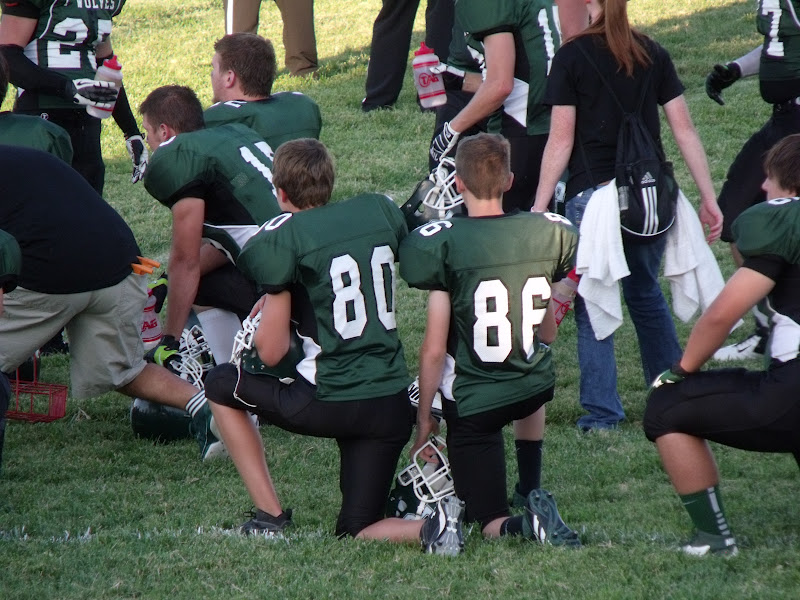 She'll stand and shout, "My son stopped that play!"
"Sit down, dear, he clipped." is all Dad can say,
She may not know a punt from a telephone dial.
But she knows when her son gets up from the pile!

Good ol' Mom, she's a dear, and your very best fan,
But you'll be her little boy even when your a man.
She makes all your games, you think with a smile,
Just to see if "her baby" gets up from the pile!