It was a great year at the State Fair.  And crazy.  And exhausting. 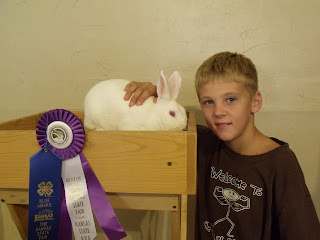 T took his Florida White, Runny Babbit. Runny is an old guy being 4 years old now, but that didn't stop him. He came home with a nice Best of Breed ribbon from the open show and a blue ribbon from the 4-H show. 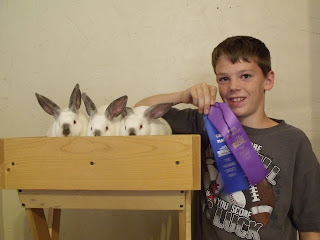 J has been working on his meat pen for about 4 months now. It was the first time he's ever done it, and learned a lot from it.  He didn't qualify it for the 4-H show, but got Grand Champion Meat Pen in the open show! (A meat pen is 3 rabbits who are to look exactly alike or as close as possible in body type and be pretty much the same weight.  I think J's were all within 2 oz of each other.  It sounds easy, but it's a challenge.) 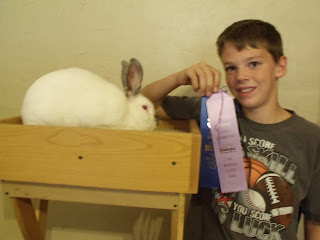 J took his Sr Buck Californian, Truman and came home with a Best Opposite Sex in the open and a blue ribbon from the 4-H show.  Truman does well on the table. He's J's showmanship bunny so he usually goes to all his shows, but he also gave J some NICE looking babies so he can just sit back and relax now. (Babies above in the meat pen are his boys and J's already been practicing with one for showmanship!)  Truman was J's first HOME BORN winner so he's got a special place in our hearts.  He's kinda of spoiled. ;-) 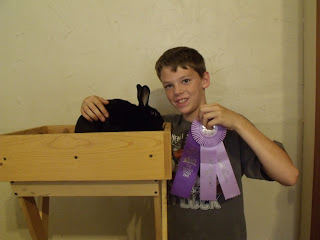 For Havanas, J took his Black Havana Doe, PR8.  She came home with a Best of Breed from the open show as well as a Best Opposite Sex and a Best of Variety from the 4-H show. 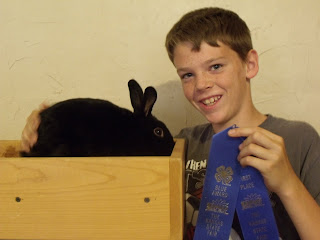 He also took his Black Havana Buck, Charlie.  He got  a Best Opposite Sex for the open and a Best Opposite Sex Variety for the 4-H show.  Charlie was J's Best In Show winner from the Dodge City show, and just might have done better had he waited to molt. He was in horrible coat condition.  Most of the rabbits there were blowing their coats in some shape or form.  People with allergies were really suffering in the bunny barn!! 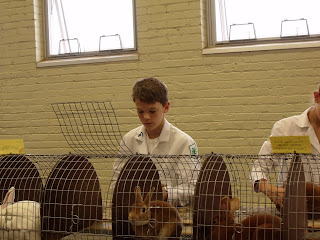 J also participated in the showmanship contest and got a blue and also the judging contest and got a purple. He was really excited about that one as its his favorite and he's really improving.  They take 4 breeds of rabbits with 4 rabbits in each group. They have numbers in the ears and they have to judge and place each group.

The boys also took some other projects.  T took his Strawberry Coffee Cake and got a white.  J took Mint Chocolate Cookies and got a red, the boat harbor picture got a red, and he received a purple on his chess board.
I'll need a year to recover from this years State Fair....and I'm not even sure that will be enough time!

Awesome job with the rabbits!! I loved the picture of the meat pen--I laughed when I saw those three little guys looking so much the same--until I read that they are supposed to look the same!! Well done!

That's wonderful for both of your boys! Congratulations!