This is T's 2nd year in 4-H so he was much more relaxed about things.

His woodworking project was changed at the last moment. He's been collecting the caterpillars that are mowing down my herb garden. Most have now turned into cocoons and declared he had a great need for a nice big bug box, so that is what he made.  It turned out perfect and the judge gave him a blue ribbon and said it was the best darn bug box he's ever seen.    T was mad it has to stay at the school until Saturday because he has stuff to put into it, and needs it now.  ;-) 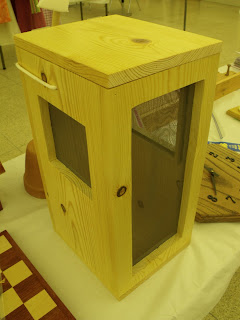 *I have to smile every time I see the boys' woodworking projects this year. They reflect them so much and the things they love.*


He also put in 2 cooking projects. He' s getting a lot better in the kitchen, LOVES COOKING, and I've discovered he's not really a cookie person. He's more a cake/pie person and has needed a little coaching on why it wouldn't be a good idea to take that 25 layer, triple chocolate cake for your level 1 project! haha  But he made German Chocolate Cookies and a Strawberry Coffee Cake. Both got blue ribbons as well as state fair blues!  He was pretty excited. Last year he was still too young to take anything to the state fair.

That's great to hear how well he did! Love the bug box, and those baked goodies sound really, really good. :)

I tried to comment last night 3 times but my internet was in hibernation--it does that--we loved the bug box too!! DId T ever make you another cobbler to taste?? Miss C woke up with the stomach flu this morning, so I probably won't see you at the fair later today!! Have a great weekend!