Every spring that we have lived here, my boys have gorged themselves on the Mulberry bush that grows in our side yard. Purple hands and feet are pretty normal around here for about a month.  My daycare kids have also discovered the bush, and the bush is usually bare from 2-5 feet up all the way around.   I've got a few that will run out the door and eat as many berries as they can while their mama and I stand on the porch and talk at pick up time.

Ever since they  have spotted them this season my boys have been bugging me to make jelly with the berries.  Ick.  You can't make jelly with MULBERRIES!  Why not, they asked.  Because...?....Well, just because.  After of few weeks of asking I finally just looked it up and  learned you, in fact, CAN make MANY things with Mulberries. Cobblers and jelly seem to be the most popular. I printed off a recipe that called for the least amount of ingredients as possible.

If I was going to make the jelly, they had to pick the berries. 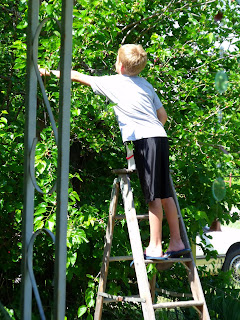 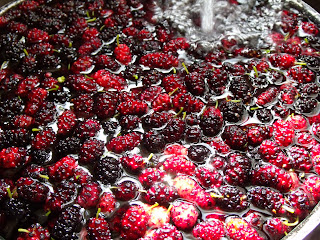 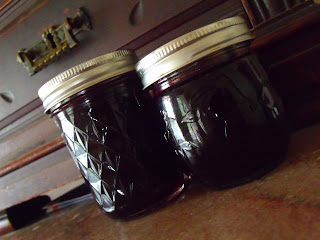 I had my reservations. I was turned off to those berries the first year we lived here. D and I were picking, talking, and tossing them in our mouths and I looked down to find there are tiny white WORMS on them. ALL over them. Never again I have eaten them. (D just shrugged and popped another in his mouth.)   I did try the jelly though and it is pretty good!! It tastes a bit like Blueberry jelly to me.  My boys are in heaven and wanting to share with their mulberry loving buddies.  I might...or might not...try to get another batch in before they are all gone. The berries were free and the men think it was awesome that we could turn something grown in our yard into jelly, and it was nice to be the "cool mom" for about 10 minutes for making it for them.  ;-)

Very interesting! I love that you make jellies and things - I'd like to in my mind, but in actuality, I just don't have what it takes to deal with it. LOL

Talking about mulberries brought back a lot of memories for me. Dad was born and raised and lived his whole life there a couple of blocks south of y'all. Grandma lived 2 houses south, and in my aunt's yard next door to her, by Grandma's hedge, was a mulberry tree with 2 tire swings in it and a sandbox nearby. I liked to eat the mulberries too, even though I heard there were "worms" in them. LOL

Dad said that he and his brothers would put a bunch of mulberries in a handkerchief, then twist and "strain" them into juice. He always wondered in later years how much Grandma appreciated having to wash those stained handkerchiefs!

A block west of us, there were some mulberry bushes by the road. I used to be riding my horse, and I'd stop and pick mulberries from horseback and sit there eating them. "Been a long time." Thanks for a fun post! :)

I'll expect a piece of toast with jelly next time I am by!! And cooked worms surely just add protein and no flavor--and ignorance is bliss!! Enjoy it!!

D is a man after my own heart. I too ate Mulberries to my heart's content when I was a boy. A couple of weeks ago we visited a friend's farm and she took me to the white mulberry trees. Oh my! They were the sweetest! I ate them with abandon worms or no worms (no worms in this case but I know what you're talking about). I also stuffed myself with the black ones :). Someday I will learn to make jelly as you have made. Bon Appetit!